It was a season that began with LeBron hate, concluded with even more LeBron hate and was punctuated with some Blake Griffin highlights and a Dirk Nowitzki championship ring.

I miss basketball season because now, there’s really nothing left on television to watch.  You don’t expect me to watch baseball, do you?

I miss basketball season, especially knowing there might not be one next season.

I miss basketball season, but probably not as much as the gentleman pictured below.

This photograph begs the question, what’s the craziest thing you’ve ever done at a sporting event?  I’ve painted my face before, but this guy, and his make-up artist, take the cake.  By the looks of it, probably carrot cake.

I’d like to thank the good folks at Shoot-Hoops.com for turning me on to this photo.  It’s one I could not resist for a post-NBA season caption contest.  So have at it, people.

After all, it’s always basketball season here at SportsChump.  Face paint or not. 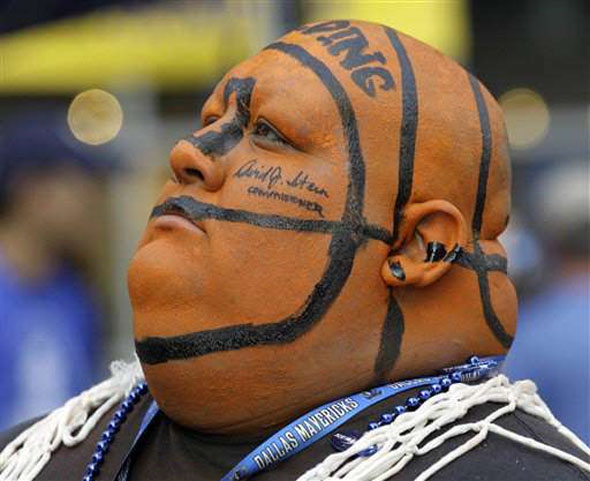