1.      representing the most choice or select; best: an elite group of authors. 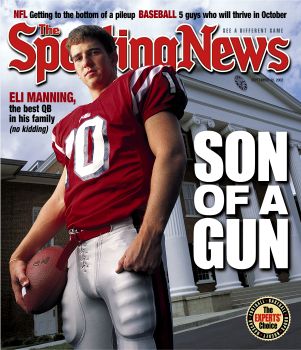 The word elite has been thrown around a lot lately, particularly when it comes to Eli Manning.  To be perfectly honest, I’ve grown tired of it.

Let me first clarify that I am by no means a Giants fan.  That would mean displaying an entirely new level of obnoxiousness.  I am truly impartial to the youngest Manning brother, even though he did lead Ole Miss to a victory over Florida in 2002, something his older brother, Peyton, was never able to do at Tennessee.

This off-season, Manning was asked on the “The Michael Kay Show” whether he considered himself to be an “elite quarterback.”  It was your typical, run-of-the-mill and otherwise meaningless question that has since spurned national debate among those of us who pay attention to things that don’t really matter.

Manning replied simply and confidently “I consider myself in that class.”

Sound the alarms and stop the presses.  Since then, the discussion of whether he is, or isn’t, “elite” has become a matter of national security.  Beating the Tom Brady-led Patriots in Foxboro last Sunday, where they hadn’t lost in twenty tries, kicked the “elite” conversation back into full gear. 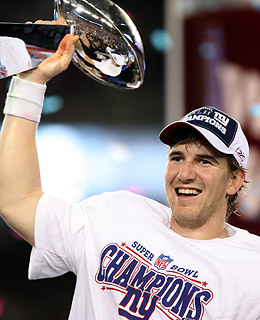 What’s the kid supposed to say?  That he sucks?  Poor Eli has already had to live in his brothers’ (not brother’s) shadows his entire life.  Apparently not even a Super Bowl, in New York of all places, is enough to exorcise those demons… or at least put an end to the inane discussions.

Professional athletes, particularly quarterbacks who are confident and competent enough to play at the highest level, don’t admit weakness, nor should they.  Find me a quarterback who says he’s not among the best in his class and I’ll show you a man standing in the unemployment line.

Only the meek get pinched.  The bold survive.

First of all, let’s presume that the entire basis of this argument is bogus… which it is.

What does “elite” even mean and of 32 starting quarterbacks in the league, how many of them are we allowed to even classify as elite?  Two?  Three?  Four?  How many is too many?

There are currently six active, starting quarterbacks in the NFL who have led their team to a Super Bowl victory.  Eli is one of them.  The others are Drew Brees, Ben Roethlisberger, Peyton Manning, Aaron Rodgers and of course, Tom Brady.

Not Phillip Rivers, not Donovan McNabb, not Michael Vick, not anyone else.

If you ask me, that in and of itself makes Eli elite. I’m pretty sure most Giants fans would agree.  Under the biggest microscope, Eli just keeps on winning.  With Manning under center, the Giants are at worst, relevant, and at best, champions.

As long as he keeps piling up victories, Eli, nor his fans, should care less whether critics label him as elite.  What matters most is that he has the confidence of his teammates and coaches.

On second thought, maybe I will start rooting for the Giants, just so that Eli can get his second ring and put an end to this conversation once and for all.