Wow, I can’t believe I just realized this.  I guess I’m a little slow on the draw. 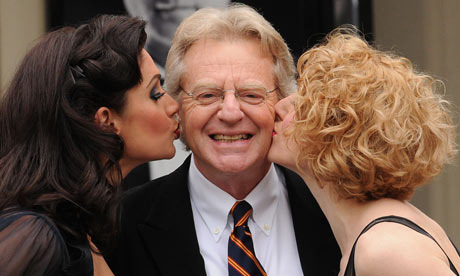 I’ll admit to enjoying mindless, guilty pleasures every now and then.  Don’t hold it against me but I used to watch my fair share of Jerry Springer back in the day.  Who didn’t?  Like most superficial males, I jump at the opportunity to catch a good cat fight or the unexpected, unveiling of a random breast.  Back in the day, watching Springer dramatically increased your odds of seeing just that.

Probably to the overall betterment of society, Springer’s not on the air much anymore, however, it looks like he’s allowed his former head of security, Steve Wilkos, to take over his show.  Now I don’t know Wilkos’ background, nor did I find it necessary to look it up on the internet, but I’m pretty sure he’s not a former mayor, like Springer, nor that he’s in any way qualified to psychoanalyze the problems of people he barely knows.  I guess being surrounded by dysfunction for so many years qualifies him to host his own talk show.  (If that’s the case, shouldn’t we all qualify?)

While flipping the channels the other day and catching Wilkos interview some under-aged, pregnant, midget stripper complaining how her baby’s daddy was cheating on her with her perennially unemployed cousin, I thought to myself, what the hell is Cal Ripken, Jr. doing hosting the Jerry Springer show? 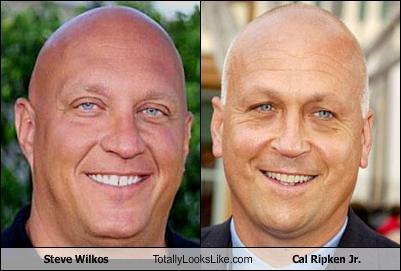 You gotta admit, these two look pretty damn alike, minus the 2632 games played streak and the 3184 career hits, although after patrolling the Springer show for so long, Wilkos probably has that many hits of his own.  Not only do they look alike but their names even SOUND the same.  Steve Wil-kos.  Cal Rip-ken.   Were they separated at birth?  Has anyone ever seen them in the same room together?  Is Wilkos the missing Orioles infielder?

Or maybe this generation’s Iron Horse simply missed his calling.  Sure, he was a pretty good baseball player but if Magic Johnson can host his own talk show, then why can’t Ripken?  He gets his fair share of face time on the MLB Network but maybe he should consider branching out to a more dysfunctional brand of television.  CBS has that Same Name show where famous people with the same name change places with others who lead normal lives.  Why not famous look-alikes?  Wilkos can go through life having people mistakenly tell him he was the greatest player of the 1980s and Ripken can break up fights between tank top-wearing hillbillies arguing over the love of their fourteen year-old girlfriend.

Now if we could just give Ripken a bat for those episodes, we’d have ourselves some quality entertainment!

21 Replies to “Will the real Cal Ripken please stand up?”