Back in December, I hosted a contest, asking each of you ten questions of varying difficulty about the upcoming NBA season.

Now that the season is about two-thirds over, it’s time to take a look back at those questions, see if any points have been awarded and whether anyone has taken an early lead. 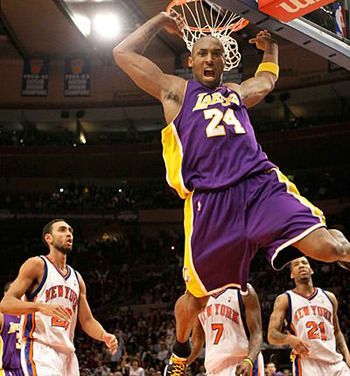 Question 1 – Who will lead the league in scoring?

Somewhat surprisingly, the old man is still getting it done, that old man being Kobe Bryant.  As it stands right now, the Mamba is leading the league in points scored per game with 29.  Hot on his tail, however, are the usual suspects, Kevin Durant (27.8) and LeBron James (27.7).

At this point, it’s highly likely that one of those three will win the award, which makes perfect sense since, out of the 14 of us who entered the pool, nine had Durant, one of us had LeBron, and only one (nice work, Ronbets) picked Kobe Bryant.

Question 2 – Which Eastern Conference team will finish with the best record?

This question was essentially a coin toss since most of us knew that only either Chicago or Miami would qualify.  With about 20 games left, Chicago is 37-10 and Miami is 2 ½ games behind at 33-11, so this one is still way too early to tell.  Eleven of us had the Heat and only three of us (J-Dub, Pest and Ronbets) had the Bulls, so a Chicago victory not only gives these three gentlemen a well-deserved two points in the contest, it would also give the Bulls crucial home-court advantage throughout the Eastern Conference playoffs.

Question 3 – Who will have a better record, the Lakers or the Clippers?

Remember pre-season when the Clippers were all the hype?  They were quickly dubbed Lob City after it became obvious that Chris Paul would regularly hit both Blake Griffin and DeAndre Jordan mid-flight for some jaw-dropping dunks.

Well, the Lakers and Clippers are currently neck-and-neck in another race that will likely go down to the wire.  Damn, I’m good.  The Lakers are currently 28-17 and the Clippers are only 1 ½ games behind them at 26-18.  Let’s just say a 4-5 playoff match-up (they’re currently 3-4) between these two teams would be must see TV, not to mention the least traveled playoff series in NBA history.

Once again, it’s still too early to tell who’s going to take this one home.  The contestants were pretty evenly split in this category, six of us choosing the Lakers and eight of us picking the Clippers.

Question 4 – Will Dwight Howard finish this season with the Orlando Magic?

Magic fans have been subject to Dwight’s changing mind all season long.  Will he, won’t he?

Well, the trading deadline came and went and Dwight remains in a Magic uniform, which leads me to believe he’ll be in one at season’s end.

Chalk up four points to the three of us positive thinkers, Ronbets, Jamie of Dallas Sports Rant, and of course myself, for predicting that Orlando could never get fair value for the big man and would do everything in their power to convince him to stay put.

Question 5 – Will the Clippers win a first round playoff matchup?

Obviously, this question can’t be answered until playoff time but as I mentioned earlier, the Clippers do NOT want to face the Lakers in the first round, even if that does mean a semi-home court advantage.

Right now, the Clippers are neck-and-neck with the Memphis Grizzlies in the Western Conference standings.  It would behoove a young team like the Clippers to secure home court advantage in the first round, particularly after the run Memphis made last year.  That’s not to say they can’t win an opening-round playoff series on the road but some home cookin’ would certainly help.

By the way, ten of us thought they would win their opening round playoff series while four did not. 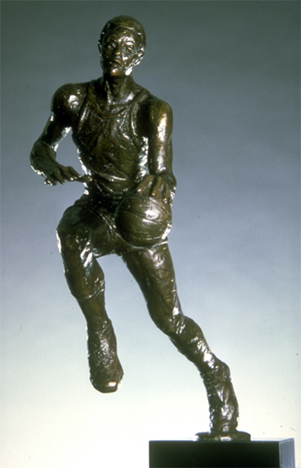 Question 6 – Who will win league MVP?

Ah, now we’re getting to the good stuff.  League MVP.  There’s been plenty of debate so far this season, not only about who will win the award, but whether someone already has it locked up.

Let me answer that question for you.  No.

The award could still, in my opinion, go to a number of candidates and the last month of the season will likely determine who ends up taking it home.

Is it already safe to exclude any of those names from the list?  I’ll let you be the judge.  Until then, we’ll have to wait and see how this thing shakes out.

Question 7 – Who will win the NBA Championship?

Needless to say, we will have to wait for June for this one to shake out as well but, looking back, I find it interesting that two of us (Pest and Snake) chose the Clippers to win it all and one of us, ahem, Jamie from DSR thought the Knicks would.  It might be time to start drug testing my readers.

It should come as no surprise that the rest of us chose Oklahoma City, Chicago, Miami or that other L.A. team. 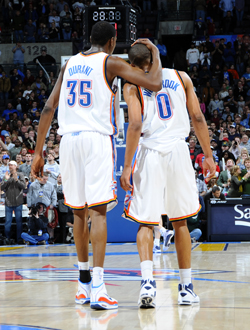 Question 8 – Which Western Conference team will finish with the best record?

The reason I allotted this question eight points and the Eastern Conference question only two is because I thought the Western Conference would be a lot more wide open.  Little did I know the Thunder would be laying waste to the rest of the teams in the conference.

Durant, Westbrook and Co. currently hold a four-game lead over San Antonio and while it’s clearly too early to wrap this one up officially, it’s hard for me to imagine anyone will catch them, or that the Thunder will allow anyone to do so.

Six of us (TopHat, Jamie, Chappy, Sports Attitudes, Die Hard Sport and myself) wisely chose the Thunder to finish atop the Western Conference.  Ironically, nobody chose the Spurs who are currently in second place.

Question 9 – Who will win Finals MVP?

This is another question that we’ll obviously have to wait until June to answer, but there are nine points riding on it, which means it could very well determine who wins the overall contest.

Well, this one’s already been answered, thanks to Mr. Durant, who poured in 51 against the Nuggets in mid-February.

Five of us actually got that correct (Snake, Aero, TopHat, Jamie and the Pest) giving them a commanding lead.  Nice work, gentlemen.  Enjoy your lead while it lasts. 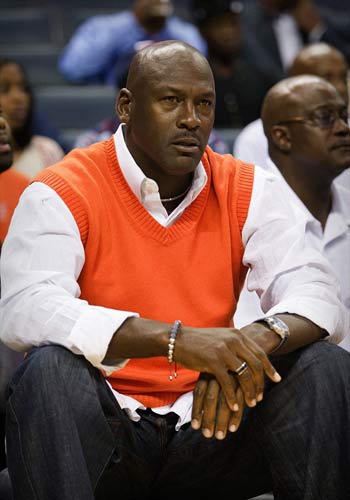 TieBreak – Which will be the worst team in the league and how many games will they win?

The worst team in the league, at least record-wise, is the Charlotte Bobcats.  They are a dreadful 6-35.   Back in the day, it would take a Michael Jordan team two or three seasons to amass that many losses.

Six of us actually predicted the Bobcats would be the worst team in the league, which is ironically how many wins the team has at the moment.  Second worst is Washington at 9-32.

We’ll see if the tiebreaker comes into play.

So stay tuned, gentlemen.  There’s plenty of basketball left to be played.