Now for more on Kansas-Kentucky.

After a long day of golf and bourbon-drinking, the details of which I’ll return to shortly, Liar North, Mrs. Liar North and I all went to a local, Charlotte sports bar to watch what everyone outside of Kansas felt was a foregone conclusion: Kentucky winning a national championship. 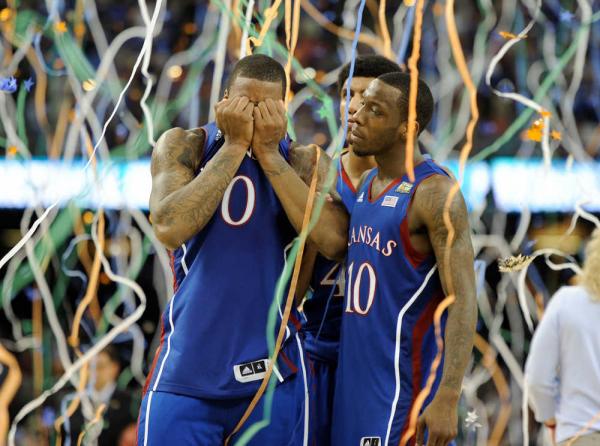 The poor kid sitting next to me on my first, connecting flight was a bright-eyed, young Kansas fan, on his way to Monday’s slaughter, er… championship game.  He couldn’t have been any older than fourteen.  I assumed so not only because of the blossoming acne on his face, but also because of the World and its Peoples textbook that rested untouched at his feet.

I wished him the best of luck in New Orleans, telling him that my Gators had met, and lost to, Kentucky three times this season.  He shrugged fearfully.  I knew full well I would have been hard-pressed to take Kansas that night but this was probably this kid’s first experience with New Orleans and I didn’t want to ruin the trip for him.  If his folks were cool enough to take him out to the French Quarter after a disappointing Jayhawk loss, this could potentially be his first glimpse of an unexpected nipple, something New Orleans is known for, and isn’t seeing a breast for the first time far more memorable than any basketball game?  As a thirty year old man, he’ll be telling his friends how distraught he was the night he saw Kansas play Kentucky… until that drunken girl with giant hooters nearby flashed the crowd.  Laissez les bon temps rouller.

As it turned out, Kentucky ended up covering the six-and-a-half point spread in what turned out to be a tight game late, but one I never thought to be in question at any point of the evening.  Kansas narrowed an eighteen point lead down to five with a few minutes remaining, but if I were a Kentucky fan, I can’t say I was ever biting my fingernails.  In the end, Kentucky, a team loaded with freshmen and sophomores, tormented Kansas, a team loaded with juniors and seniors, all night long.  So much for experience trumping talent.  Not on Calipari’s watch. 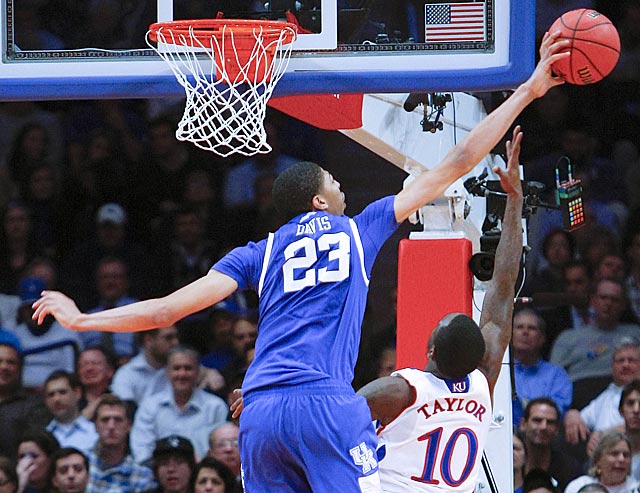 Anthony Davis, the 18-year old, uni-browed freshman phenom, once again proved he was college basketball’s best player on its biggest stage.  He picked up the tournament’s Most Outstanding Player honors after only converting one field goal, probably becoming the first player in history to do so.  That trophy likely had his name engraved on it before the tourney even began.  Despite limited scoring, he put his fingerprints on the game all night, finishing with 16 boards, five assists, six blocks and three steals.  We’ll find out soon whether he’s one-and-done, jumping to the pros as many expect.

But on to things that really matter: My Monday afternoon beatdown of Liar North on the golf course.

It’s funny how two people can look at a scorecard and see two totally different things.  To be perfectly honest, he edged me out by two strokes on Monday’s round but then again, he believes in revisionist math and was the one keeping the score.  And besides, I told him score was only a state of mind.  Tuesday’s round was even less competitive. 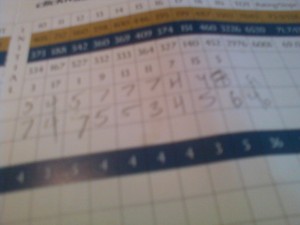 The courses we played were beautiful.  After 36 holes, I begrudgingly concede that Liar North is the better golfer, but since he doesn’t run a sports website and I do, when I say that the rounds were neck and neck, you’d have to believe me.

I’m slowly becoming resolved to the fact that I’m not a very good golfer, and never will be.  My score exceeded triple digits in both rounds and it’s slowly becoming more obvious that lessons are needed.  But I will say this, Liar North also shot over 100 both days as well.  I had the only birdie, a beautifully-read chip shot from just off the green on 15, and I also managed the best nine of the eight we played.  So I had that going for me, which is nice.

After a long Tuesday night of billiards and Grand Marnier, and an unwilling concession of defeat, the following morning would at long last bring the three hour drive to Augusta National.

Click here for My Journey To Augusta National, Part One

12 Replies to “My journey to Augusta, Part Three: Bourbon, bogies and unibrows”