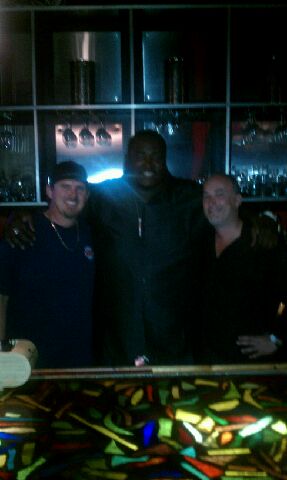 You guys remember that movie The Blind Side?  A film based not too loosely on the book by Michael Lewis and the life story of Baltimore Raven offensive lineman, Michael Oher?  Blind Side won Sandra Bullock her first Academy Award and marked the big-time, acting debut of Quinton Aaron, who played Oher.

Well, you guys also know I tend bar at one of South Tampa’s finer restaurants, right?  And you also know that I run karaoke Wednesday nights?  I mean, how could you not at this point?

Well, who would have guessed that these two star-studded events would eventually cross paths?

Aaron and the crew of his latest project were visiting the Bay area, doing some charity work and putting the finishing touches on their latest project.  They just happened to stumble into my bar.

I soon found out that, not only can Aaron act, he can sing as well.

As the crowd at the bar encouraged the six-foot-eight movie star to get on stage, little did any of us know what he had in store for us.  See, in my mind, certain artists are simply not to be duplicated, certain songs left unsung.  Marvin Gaye’s “Let’s Get It On” happens to be one of those.  If you’re not going to pay it proper tribute, then just leave it alone.  But as you will soon see, Aaron did that and then some.

With his permission, I thought I’d share a little of his vocal stylings.  Thanks, guys, for a great night and… let’s get it on!

36 thoughts on “Blindsided by Quinton Aaron”