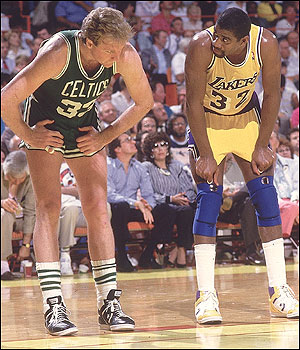 Magic versus Bird, Russell versus Chamberlain, Jordan versus everybody else.  These are the rivalries that molded the National Basketball Association into what it is today.  It’s why so many fans resented LeBron when he decided he’d rather play with his best friend instead of eking it out on his own.

But fear not, NBA fans.  We may be on the verge of another great rivalry.  If franchise owners play their cards right, these two teams could dominate the league for years to come.

I’m not talking LeBron versus Kobe.  That’s a Finals matchup we have yet to see. It can’t be LeBron-Carmelo.  Even though they entered the league in the same year, LeBron is showing us he’s a far more dominant player.

But it might, just might, be LeBron versus Kevin Durant, the Heat versus the Thunder, Miami versus OKC.  Basketball fans in the Pacific Northwest are collectively drowning their sorrows in their lattes.  If only they had shown up to the games.

I’m not saying this year’s Finals will consist of a Heat-Thunder match-up, but after watching these two teams step up their games in the first round, it’s becoming more and more obvious to anyone who’s watching that there are four men on the floor, Wade, James, Durant and Westbrook, that are simply un-guardable.

One thing that has always held true about the NBA is that teams, and players, must pay their dues along their march to basketball immortality.  Superstars don’t just come into the league and win championships, unless their name is Magic Johnson, and even he had Kareem Abdul-Jabbar by his side.

Wade’s won his… with Shaq.  LeBron’s been to the Finals twice… and lost.  The Thunder lost to the Mavs in last year’s Western Conference Finals.  Even Michael Jordan was beaten and abused for years by the Detroit Pistons before he could taste greatness. 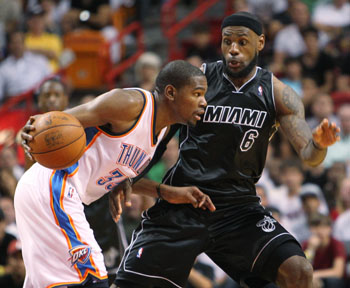 In 2012, we may be on the verge of crowning a brand new champion, featuring two young teams that have paid their dues.  I don’t mean to discount either Los Angeles or San Antonio in the West (and yes, I do mean to discount every other team in the East) but an Oklahoma City-Miami Finals would not only be insanely exciting to watch, with literally three of the top five, and four of the top ten, players in the league, but if these team’s rosters remain intact, always a tough assumption in modern-day sports, we could be witnessing the beginning of sports next great rivalry.

Of course, this may all be premature, the Heat and Thunder might not get there.  Both teams could disband next season, but let’s hope not.  They’re both too fun to watch.

When I started watching the NBA, the Lakers and Celtics dominated the Finals landscape.  With no allegiance to either team, I found it routine that those two teams would always be fighting it out at the end.  Looking back on it now, those were two of the most talented teams the league has ever seen.  I just didn’t recognize it.

The league could stand to have another strong rivalry like that.  It looks like they’re about to.