I’ve been meaning to write this post for a while now, to pay tribute to Kevin Garnett, inarguably one of the best players of his generation.

Let’s say you had to describe Kevin Garnett to someone who had never before watched a basketball game, yet laid eyes on him for the first time.  What words would you use?  Would frightening be one of them?  Intense?  Driven?  One-of-a-kind?  All of those would be appropriate since after all, Garnett helped redefine the modern game in a number of ways.  He was one of the first of this generation to come straight out of high school, make an impact, in a small market and warrant big money, Garnett money. 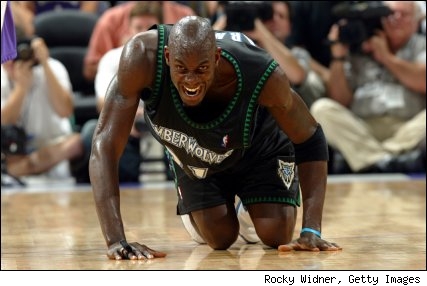 Was he a center?  Certainly not.  At 6’11”, he was tall enough but he couldn’t have weighed more than a buck-eighty five.  Was he a power forward?  Again, too frail.  Was he a small forward?  Nah, too tall.  So what was he, other than a freak of nature?

Seventeen years later, Garnett is still a freak of nature and proud of it.  In Boston’s last playoff series, Atlanta Hawks co-owner, Michael Gearon, Jr., who nobody outside of Atlanta had heard of before his ill-advised comments, called Garnett a “dirty player.”   Wrong thing to do.  Garnett responded with 28 points, 14 rebounds and five blocks.  He later publicly thanked Gearon for inspiring him.  Remember that scene from Teen Wolf where Michael J. Fox’s father growls at the principal, causing him to instantly soil himself?  Exactly.  Garnett, the werewolf.

At one point in Game Two against the Philadelphia 76ers, with his Celtics on the verge of winning a game they eventually lost, Garnett received an alley-oop pass from Rajon Rondo with Evan Turner directly underneath him.  Garnett hung on the rim longer than normally allowed, ensuring he didn’t come down on top of Turner, but the statement was made.  After finally landing, Garnett muttered to his teammates, probably louder than a mutter in the jam-packed Fleet Center, “I’m a fucking wild man right now!” 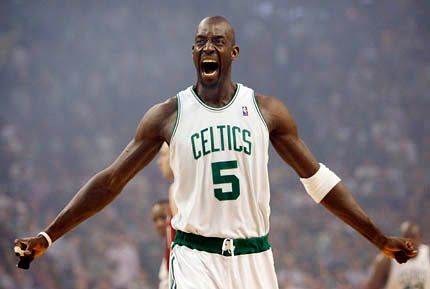 Who says these things?  Kevin Garnett, that’s who, and he means every word of it.

I have long admired Garnett for his intensity, his energy and his uncompromising nature.  There’s a reason he’s 35 years old and still weighs 220 pounds, soaking wet.  His metabolism must be off the charts.  If you could bottle what drives Garnett and sell it, Five Hour Energy would be out of business in a week, after of course the FDA diluted his Garnettness to make it safe for public consumption.

High energy guys like me will always have a soft spot in our heart for Garnett.  He wants to win every time out.  He wears his emotions on his sleeve and refuses to apologize for it.  Garnett cares not about numbers, even though he’s the second active leading scorer (behind Kobe) and active league leader in rebounds.  He might say he doesn’t care what those outside his locker room think of him but that’s a lie.  Gearon bothered him and he made him pay.

But Gearon got it wrong.  Garnett’s not dirty at all.  He’s just plain old nasty.  And he can play on my team any day of the week.

34 Replies to “An ode to Kevin Garnett”