Fibbs walked into the bar that afternoon, his orange Knicks cap tilted backwards, gold chain around his neck and Amare Stoudemire jersey (sans cast) worn proudly.  He had been drinking all day and was smiling, giddy almost.  After all, why wouldn’t he be?  His Knickerbockers had just won their first playoff game in eleven years, an accomplishment Knicks fans were begrudgingly proud to celebrate.  Fibbs’ joy was short-lived, however, as the Knicks could only muster that lone, post-season win.  They were dismissed by the Miami Heat the very next game. 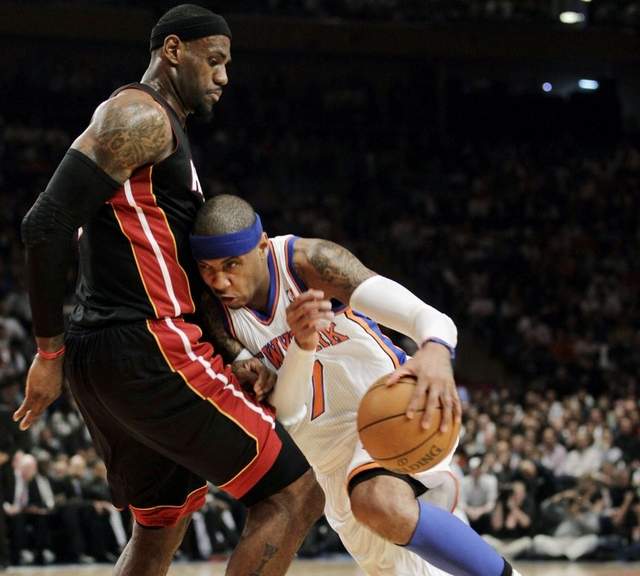 The proud yet highly dysfunctional Knickerbockers franchise has talent, but boy, are they a mess.  Coach fired mid-season, their hundred million dollar man’s hand stitched up like a softball, their most popular player on the sidelines still unproven and their best player taking way too many shots.  It’s enough to make Phil Jackson’s stomach churn.

I don’t mean to turn this into a bash Carmelo Anthony post, nor am I insinuating that with more balanced scoring the Knicks could have beaten the Heat.  They couldn’t have, but at least they could have made it more interesting.

There are two things we know about the Miami Heat.  They’re susceptible down low and they are the most dangerous, fastbreak team in the league, thriving on opponents’ ill-advised shots and missed field goals.  The Knicks didn’t do enough of one and did too much of the other.  Perhaps Coach Woodson never got that memo.  Hence their first-round exit.

After watching Carmelo launch 26 shots in a Game Two loss, while teammate Amare Stoudemire took only nine (ten, if you include his final shot on a locker room fire extinguisher), I started thinking about the importance of balanced scoring when it comes to winning championships.  Certainly, Carmelo taking over one-third of New York’s shots could not bode well for their success.

So I decided to take a look at some of the most famous chuckers in NBA history and see how their teams fared over the years.  I also looked at a number of different championship teams to see if I could find a trend because clearly, what the Knicks are doing, ain’t workin’.

I’m not sure the data proves that balanced scoring alone wins championships, but it definitely doesn’t hurt.  I’ll let you decide for yourself.  Unless you have Michael Jordan on your team, it appears prudent to not have one player taking over one-quarter of your teams shots.

32 thoughts on “Carmelo Anthony, the New York Knicks and whether chuckers win championships: A statistical analysis”