I walked into the Pebble Creek clubhouse at the turn, to quench my thirst with a refreshing Jack Daniels and Coca-Cola cocktail last Tuesday afternoon.  The lukewarm cans of Yuengling on the front nine weren’t sitting well.  Like any good sports fan, I glanced at the television while the bartender prepared my drink. 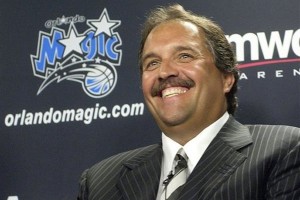 There I saw it, the sound of inevitability.  Stan Van Gundy and Otis Smith had both been dismissed from their positions with the Orlando Magic.  Operation Clean Sweep.

Their dismissals, or at least Van Gundy’s, was only a matter of time, his desk probably cleaned out long before the news arrived.  Otis Smith had bought the groceries, but the cupboard had gone bare.

Once upon a time, Dwight and Stan got along famously.  Dwight would willingly do impressions of Stan and Stan understood that Dwight was his chance at coaching immortality.  In the end, it didn’t quite work out that well as Stan is now out of a job and Dwight, for the time being, remains in Orlando. 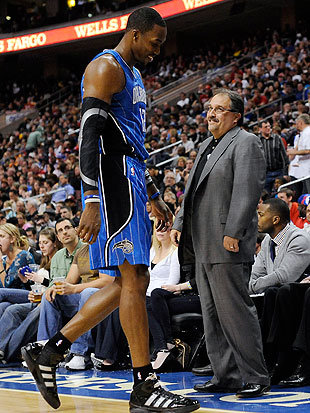 My take on Stan Van?  I liked the guy.  Was he the kind of coach that would end up with a ring?  Who knows?  He led Orlando to the Finals, just not one giant step farther for Magic-kind.  Five seasons with the Magic, five post-seasons with the Magic.  With a 259-135 regular-season record, Stan won nearly 66% of its games.  Orlando will soon find out whether his replacement will be able to duplicate that success.

At this point, outsiders can only guess whether the DeVos family is consulting Dwight on their future hires, all the while his decision to stay or leave remains undetermined.  One thing, however, is for certain.  The Stan Van Gundy era is over in Orlando.  And he can probably sleep better at night because of it.

The future of the Orlando Magic now hangs in the balance.  This is a franchise that has twice been to the NBA Finals but in a hyper-competitive league that features a handful of superstars in a few, concentrated markets, the Magic are going to have to be as aggressive as possible in wooing athletes to play in their town.  The LeBrons, Wades and Durants of the world only come around so often and there’s no one on the horizon near as talented as them.

Since the 1980s, and probably farther back than that, only one team has won an NBA title without a bona fide superstar.  Lose Dwight, or fail to replace him with equivalent talent and the Magic might just seal their fate.  Despite all Dwight’s whining, that’s what Magic fans fear most: life without the big man.

So now we sit, wait and hope for the best.  As we’ve seen lately, it may get worse before it gets a whole lot better.