“We had nothing left.” 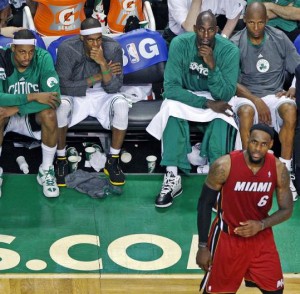 As shots clanked off the front of the rim, as sweat poured off their elder brows, a few things became obvious in what may have been the end of an era, and the beginning of another.  As talented, determined and Hall-bound as they were, the 2012 Boston Celtics were simply not as good as the Miami Heat.

As a strictly impartial observer, I have ridden the Miami Heat bandwagon all season long.  It just seemed like the natural progression of things.  While this team is still flawed, with two of the planet’s three most talented players, the Heat have taken a page out of the Jordan-Pippen playbook and presented a duo too difficult to defend.  That’s my stance and I’m sticking to it.

I got to watch some of the Heat-Celtics Game Seven, not as much as I would have liked considering I was working, but I did manage to watch the replay I so wisely DVRed.

Here are a few things that stood out…

Boston’s bench scored only two points that night, those coming from Ryan Hollins, mid-way through the second quarter.  Despite shortened season and immeasurable will, the Celtics’ elder statesmen were absolutely gassed by the time the final minutes of their season came to pass.  That’s no excuse, that’s just reality.

Despite his coaching acumen, Doc Rivers’ decision to play Brandon Bass on LeBron James probably backfired.  Not that anyone can, but there was no way Bass could guard James on the perimeter.  As a result, James made him pay.

Credit Erik Spoelstra for using Chris Bosh as a perimeter, offensive player.  Bosh, who had hit only 10 three-pointers all season, canned three BIG three-point shots in Game Seven, a tactic Boston could not have game-planned for.

As expected, Shane Battier was a solid pick-up for Miami.  Battier is a smart player (he went to Duke, duh!) who knows his position on the floor, provides major minutes, doesn’t overstep his bounds, can defend multiple positions, post up for the occasional basket, or at least pose the threat of doing so, as well as hit a timely three.  His experience and versatility will be key against Oklahoma City.

The Celtics start three, first ballot Hall-of-Famers in Kevin Garnett, Paul Pierce and Ray Allen.  That being said, Rajon Rondo is the best player on that roster.  He led the Celtics in points, assists and rebounds in Game Seven and was the only Celtic player able to keep the Heat honest.  Were it not for his penetration, as well as the fact that he’s eight years younger than his ring-bearing brethren, the Heat would likely have made quicker work of the boys in green.

Much has been said about Oklahoma City’s home court advantage but the American Airlines Arena is louder than you think.  And it was a valiant gesture for Boston fans to cheer their team on as they left for South Beach after Game Six, but one can’t help but think those cheers were an appreciative farewell to a Celtics team they may never see again.

With the Heat’s core intact, and the Bulls contenders for some time to come, pending Derrick Rose’s healthy return from injury, the Celtics, as currently comprised, will not be able to contend with either of those teams through a long, 82-game season and a deep playoff run in 2012-13.

Ironically, more than any coach he’s ever played for, Doc Rivers may have brought the best out of LeBron James. 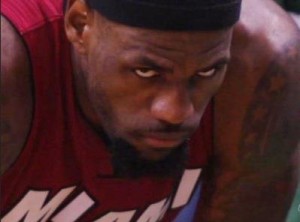 Miami is an underdog in their upcoming series against Oklahoma City.  I’ve been warned by knowledgeable basketball friends that they’ll lose but I don’t see it that way.  After his ungodly performance in Game Six, Heat teammates seem to be finally responding to LeBron’s lead.  This is his time.  As a fan, if you’re not seeing that, you’re not paying attention.

I may be wrong.  God knows it’s happened before.  But match-ups, breakdowns and analyses aside, the natural progression of things is for LeBron James to win his first championship this year.

If that doesn’t happen, I’ll pay my bets, and shut off my television for the summer.  LeBron might want to do the same thing.