Suddenly, I’ve found myself in a generous mood.  Consider it Christmas in July.  Since I can’t buy all my readers a drink at my local watering hole, which would certainly dent my wallet knowing some of you, I thought I’d offer up another contest. 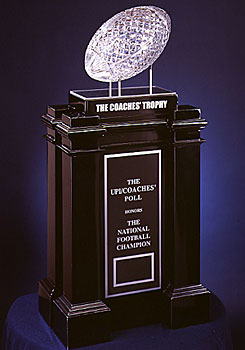 This one is simple, and better yet, it’ll get you even more excited for the college football season than you already are.

We have just under two months until the first oblong object is officially kicked off, marking the beginning of another glorious college football season, and more significantly, the end of the BCS as we know it.  In case you’ve been living under a rock, the powers-that-be have decided to institute a four-team playoff beginning in 2014.  Whether that moves us one step closer to determining a true national champion or muddles things even further remains to be seen.

Regardless of where you stand on the BCS, the task that lay in front of you is simple.  Choose this year’s national champion and win a free t-shirt.

Here’s the catch… you gotta get your pick in quick.

Only one team per contestant!!!  Once one reader chooses a team, that team becomes ineligible for anyone else to select.  Sorry but I’ve chosen this process to reward my regular readers.  In fact, you may want to list a second and third choice below, just in case I run behind in approving comments.  Please check back to ensure your vote has been properly tallied.  Furthermore, since most of you are Gator homers, I am taking them off the board by selecting them myself.  It’s not like they’re going to win it anyway so consider this me doing you a favor.

There are no pre-season rankings out yet so you guys are essentially flying blind.

Ladies and gentlemen, I hereby invite you to join this year’s College Football National Champion Pick ‘Em Contest.  Just place your name and the school of your choice in the comments section below and um… best of luck.