We were about to elect a president who was fornicating everything in sight, but we didn’t care because the economy was good.  Silence of the Lambs won best picture, Roseanne was still funny and as seen in the video below, not only was it cool for black guys to wear spandex, but there was apparently some “I’m a better dancer than you are” spat between the now broke MC Hammer and the currently deceased Michael Jackson.  Furthermore, steroids were something sports fans only associated with professional wrestling and Arnold Schwarzenegger.

That year, Hammer was doing his best to follow up the unprecedented success of his Rick James sampled “Can’t Touch This” only a year before.  Regardless of what you think of “Too Legit To Quit,” it had a catchy hook and the album went triple platinum.  Aside from that, the most enjoyable part of the video, other than James Brown in the intro of course, is the end of the song where the biggest athletes of the day performed the “Too Legit To Quit” mantra with their thumbs, forefingers and a simple flick of the wrist.

In addition to some athletes we still revere like Kirby Puckett, Chris Mullin, Jerry Rice and David Robinson, Hammer features a few other gentlemen we view a little differently twenty years later. 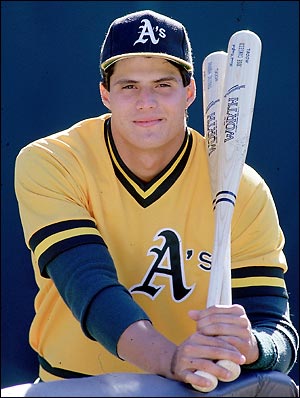 Once upon a time, this Cuban-born kid from Miami was on the verge of revolutionizing the game.  Not only could he hit for power, but he was a monster on the base paths.  Canseco became the first major leaguer to hit 40 home runs and steal 40 bases in a single season.

Then he got big.  Fans noticed but didn’t think twice about it.  Neither did Major League Baseball.  The arms of he and Oakland A’s teammate Mark McGwire got progressively larger, as did the distance they hit a baseball.

Canseco eventually became the poster-child for steroid use in the sport.  In 2005, he released Juiced, a tell-all book about baseball’s rampant steroid use where he named names and made many an enemy.

These days, Canseco has become a parody of himself, what with all the celebrity boxing matches, tanning salon visits and reality TV shows, but once upon a time, back when MC Hammer was still relevant, Canseco was the most feared bat in the game. 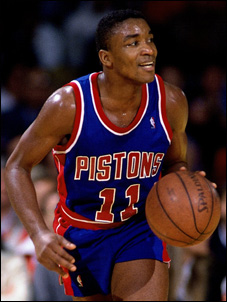 By 1991, the Bad Boy Pistons had just finished their run of consecutive championships, led primarily by their point guard, team leader and best player, Isiah Thomas.  Their reign ended that very year as Michael Jordan and the Chicago Bulls would soon rattle off three championships in a row.  The Bad Boys were no more.

Thomas retired a few years later and became part owner of the Toronto Raptors, where he drafted such talent as Marcus Camby and Tracy McGrady.  He left Toronto after only four years in the organization due to disagreements with fellow owners.

He later bought the Continental Basketball Association, which folded in only a few years.  King Midas Isiah was not.

He went on to coach the Indiana Pacers and had reasonable success there in three years, but was summarily fired when Larry Bird took over general management duties in 2003.  Thomas then became President of Basketball Operations for the New York Knicks but was released in the midst of a sexual harassment suit in 2007.

He most recently went on to coach in the college ranks, at FIU in Miami, but didn’t have much success their either, winning only 11 games in his best season.

Despite his talent, Isiah’s been outcast by the 1980s NBA click.  He was left off the 1992 Dream Team because of how he played the game.  To this day, no one will touch him with a ten foot pole. 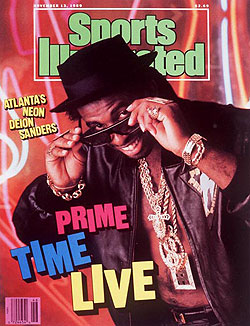 “Spiderman” and “Prime Time” were teammates on the Atlanta Falcons in the early 1990s.  Deion was one of the most insanely athletic talents we’ve ever known, excelling in both professional football and baseball.  Rison went to the Pro Bowl every year he was with the Falcons, from 1990 to 1993, and ranked in the top five in receptions each of those years.

Then Deion found God and Andre married a hip-hop artist.  In 1996, Sanders was arrested for misdemeanor trespassing and only recently, his on-again, off-again marriage to Pilar, mother of three of his five children, made headlines when SHE was arrested for domestic violence.

It’s not all bad for Deion these days.  He was recently elected into the Pro Football Hall of Fame and serves as an analyst for the NFL Network.  He just needs a little marital counseling.   But then again, don’t we all.

In 1994, Rison had his house burned to the ground by long-time girlfriend Lisa ‘Left Eye’ Lopes of TLC.  There were more than just rumors of domestic abuse in this relationship as well.  People don’t just burn houses to the ground for the hell of it.  Lopes passed tragically in 2002 and after making nearly twenty million dollars playing professional football, Rison declared bankruptcy in 2007 for failure to pay child support. 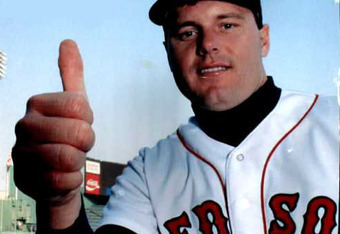 Finally, we get to the Rocket.  I’m not going to bash the Boston-traitor, donut-eating, steroid-using, frosty-tipped Clemens more than my uncle already has.

The token, soul-less white guy in the video (Chris Mullin does not count for he clearly has soul), Clemens was still dominant for the Red Sox in 1991.  Over a seven-year stretch, he had no fewer than 17 wins, including going 21-6 with a 1.93 ERA in 1990, finishing second in Cy Young voting to Bob Welch who went a very flash in the pan 27-6 that year.  In no other season did Welch have more than 17 wins.

Despite his illustrious career on the field, along with Barry Bonds, Roger Clemens has since become the name we all associate with not only steroid use but perjury as well.

As for Hammer, he turned 50 this year.  His balloon dance pants are hanging in a Planet Hollywood somewhere.  Despite having sold 50 million records, Hammer declared bankruptcy in 1996.  His moves will live on, however, as many to this day try to duplicate the Hammer dance unsuccessfully.

Thanks for the trip down memory lane, Hammer.

50 thoughts on “Celebrate the Disgraced Sports Superstar with MC Hammer”