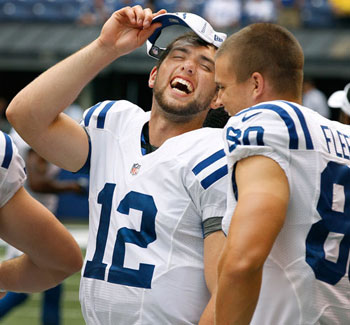 It may only be the preseason, but there were still storylines galore from the first week of football.

How can we begin any review without talking about the number one pick in this past summer’s draft? Andrew Luck was spectacular in his Indianapolis debut, throwing for 188 yards and two touchdowns in a blowout victory over the St. Louis Rams.

It probably did his confidence a little good after his first completion wound up being a 63 yard touchdown. You couldn’t ask for a better start to your NFL career. Luck looked mature beyond his years and showed tremendous composure in the pocket.

Another rookie quarterback, Ryan Tannehill, looked extremely sharp in his debut as well.

Tannehill finished 14 of 21 for 167 yards and one touchdown, pleasing all of those involved with the Dolphins organization. Though David Garrard is being rumored to be the starter once the regular season begins, some more performances like this from Tannehill could sway the tide.

We’ve got to mention the tandem of Matt Ryan and Julio Jones as well. Ryan completed 9 of 13 passes and finished with 155 yards in the opening week, and Jones was his preferred target. The explosive second-year wideout had six receptions for 109 yards and a score.

A lot of people are thinking Jones can emerge as a top-five receiver this season and he’s certainly done himself no harm with this early performance. If he can click with Ryan once again this year, the Falcons will rightfully be a strong contender in the NFL odds.

In terms of team efforts, the best came from the Denver Broncos, who beat up on the Chicago Bears to the tune of 31-3 victory. Peyton Manning was 4 of 7 for 44 yards and an interception in the win.