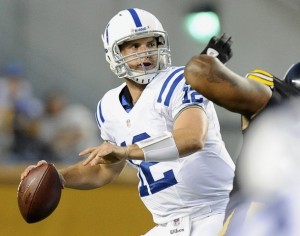 Week 2 of preseason play started with two games on Thursday and six on Friday.

There were certainly some surprising results, even if exhibitions are far from important when it comes to final scores.

For example, the Cleveland Browns topped the Green Bay Packers 35-10, the Tennessee Titans beat up on the Tampa Bay Buccaneers 30-7, the Minnesota Vikings won 36-14 over the Buffalo Bills, and the Jacksonville Jaguars finished with a 27-24 road win over Drew Brees and the New Orleans Saints.

Elsewhere, the Arizona Cardinals beat the Oakland Raiders and the Detroit Lions and Carolina panthers won their games as well.

There may have only been one game on Sunday but it was a terrific one. The Pittsburgh Steelers survived with a 26-24 victory. On Monday, the Philadelphia Eagles held on despite losing Michael Vick to injury and overcame the New England Patriots 27-17.

Looking ahead to this week and our potential NFL picks, the Packers will play the Bengals in Cincinnati and Jacksonville/Baltimore and Arizona/Tennessee will all be in action on Thursday too.

Friday features some interesting NFL encounters, including the Giants up against the Bears and the Browns and Eagles, both of whom are undefeated, meeting up in Cleveland.

This week’s schedule finishes off with Denver/San Francisco and the New York Jets at home to the Carolina Panthers. Both games will be on Sunday.