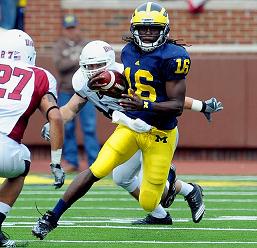 The college football season kicks off on Thursday and the Big Ten will be in the center of all of the action this weekend. Although there are only three Top 25 matchups in the first week of action, two of them will feature Big Ten teams.

On Friday night, the Michigan State Spartans will host the Boise State Broncos in a nationally televised affair on ESPN. If the Big Ten wants to earn some respect to start the year, the Spartans will have to win this contest.

While the storyline going in is that both teams are replacing record-setting quarterbacks, the truth is that the Broncos have to replace a lot more than just that. The Broncos are also going on the road while trying to replace their starting running back, four starting defensive linemen and top three linebackers.

The Broncos have fared well in these types of early-season non-conference contests but that was with Kellen Moore under center, who finished his college career 50-3. Starting Joe Southwick – and an entirely new cast – is a whole other challenge.

Speaking of challenges, the Michigan Wolverines will carry the flag on the college football odds into the highlight matchup of the week against the Alabama Crimson Tide on Saturday night. The Tide are the reigning national champs while the Wolverines are coming off a Sugar Bowl win.

All eyes will also be on Penn State as they start the healing process this weekend when Ohio visits and also on the Ohio State Buckeyes, who began the Urban Meyer era.

4 Replies to “Big Ten In The Spotlight In Week 1”