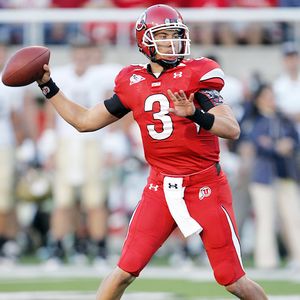 The Utah Utes were tossed a softball in their regular season opener when Northern Colorado visited but they’ll get a much stiffer challenge when they visit Logan on Friday to face their in-state rivals, Utah State.

The Utes downed Northern Colorado 41-0 but believe it or not, they didn’t look that great in doing so. The Utes are a 7.5-point favorite on the college football odds for Friday’s contest but they’ll have to put together a better effort to win.

They’ve beaten Utah State every year since 1997 but the Utes looked fairly vanilla in their opener. We’re still not sure whether or not Jordan Wynn can be the prolific passer many once expected him to be. He went 19-of-27 for 200 yards, a pair of touchdowns and an interception in his first start since the fourth contest last year. It wasn’t a bad outing but more was expected given the caliber of opponent. Head coach Kyle Whittingham said he wanted to see more from his quarterback and how his downfield throws would look after shoulder surgery last season. Unfortunately, his first downfield pass was picked off.

The good news is the Utes defense was air tight. They pitched their first shutout since 2007 and didn’t even allow their opponent to cross the 50-yard line.

Meanwhile, Utah State crushed Southern Utah 34-3 in their warm-up and they’ll be ready to go at home for a nationally televised game.

It’s actually going to be the last matchup between these teams for a while and Aggies head coach Gary Andersen will be eyeing a big win. He was a former assistant with the Utes so he’s very familiar with what they do.

All the pressure is on Utah for this contest but they are clearly the better team. Even if Wynn didn’t look great in the opener and doesn’t look great on Friday night, the running game and defense should carry the Utes to a convincing win.