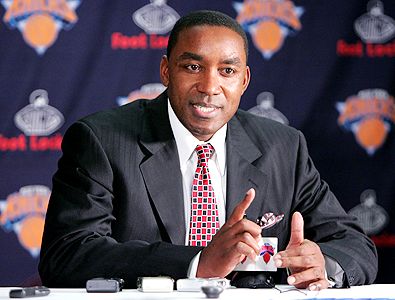 There are certain things in life I guess I will never understand.  Women just happen to be one of them.  The constant rumors of Isiah Thomas returning to the Knicks is most definitely another.

It happens every few months.  You wake up, surf the internet to check the box score of your favorite team and there you see it, like clockwork.  Inexplicably and quite illogically, the Isiah Thomas-New York Knicks rumors resurface.  It’s like that annoying case of emphysema that keeps coming back no matter how many times you’ve applied the cortisone.

Just to be crystal clear, let’s review exactly what happened here.  This is a divorce that goes beyond reconciliation, or so one would think.

As we all know, Isiah Thomas was one of the greatest NBA players of all-time.  That much is indisputable.  It’s what happened AFTER he traded in his uniform for a three-piece suit that is in question.  After relatively unsuccessful tours of duty in Toronto, Indiana and the Continental Basketball Association, Thomas landed a gig with the New York Knicks as their President of Basketball Operations, a title I SO want on my business cards.

Not only did Thomas make poor financial and roster-based decisions on behalf of the franchise, he was dismissed in the wake of a multi-million dollar, sexual harassment scandal.

I’m no expert on the matter but I’m pretty sure if I was fired by an employer for sexually harassing someone I worked with, and that grab-assing resulted in an embarrassing lawsuit, no matter how good a job I did for them, which in this case Isiah did not, I probably wouldn’t be invited back inside the building ever again, nor would there even be any discussion of such matters. 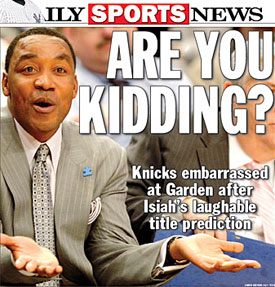 Yet for some reason, this isn’t the case with Isiah and the Knicks as the rumors have once again surfaced.  Isiah did such a poor job in the Big Apple and left under such scrutiny that it’s absolutely inconceivable that anyone in their right mind, Isiah’s agent, his family, the press, anyone within the organization, a bum sleeping in a cardboard box outside Madison Square Garden, could ever logically link Isiah back to the Knicks.  It’s not even funny by accident.

So who is it that’s spreading these rumors and how is it that they could still bear any weight?  Is it coming from Isiah’s camp, feelers whispering into the right person’s ears, their intention to litter the internet as he looks for his next job?  Maybe it’s just the Knicks fucking with him.  Or maybe it’s like that old game of operator where one person tells another  “Hey, did you hear there’s absolutely no way in hell the Knicks would ever rehire Isiah Thomas” and the “no way in hell” part gets lost in translation.

Since the 21st century is all about technological advancement, perhaps there is a way we can block these rumors from ever again reaching the World Wide Web.  Like a spam-blocker, but way better.

Unless, of course, these rumors are actually true.  If that’s the case, the Knicks are in far worse shape than I thought.

30 thoughts on “Things in sports I’ll never understand, Part One: Isiah Thomas and the Knicks”