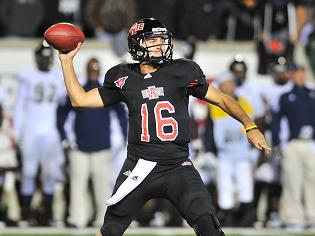 The Sun Belt has always been looked upon as one of the worst conferences in college football, but last week, the Louisiana-Monroe Warhawks might have given some new respect to the boys from the Southeast when they knocked off the Arkansas Razorbacks. On Saturday at 12:00 p.m. (ET) in Lincoln, the Arkansas State Red Wolves will hope to make for great college football picks against the Nebraska Cornhuskers.

This game is going to be a tale of two quarterbacks that play the game in quite similar ways. Taylor Martinez is a signal caller that is going to be able to get up and down the field with both his arm and his legs. The Corona, California native has thrown for 533 yards and rushed for another 122 this year.

Last week in the big game of the year to date though, Martinez came up short, as he took a safety in the fourth quarter and watched as the UCLA Bruins rolled off nine straight points. The Cornhuskers went a stretch of over 20 minutes without scoring a point in the second half.

And then there’s Arkansas State’s Ryan Aplin, a senior quarterback with a ton of experience from Tampa, Florida. Aplin has thrown for 606 yards and rushed for 110, and he has clearly loved to be in Head Coach Gus Malzahn’s crazy offense.
There definitely are some big problems that the Red Wolves need to work out defensive though, as they have allowed a whopping 85 points in their first two games of the year. That being said, they have the ability to do a lot of damage with Aplin calling the shots, and they certainly will put some points up in Big Red Country.
Nebraska dominated when these two teams met in 2009 by the count of 38-9, but that was the only meeting these schools have ever had on the gridiron. Coming off of their loss to UCLA, the Cornhuskers are laying 24 ½-points, while the ‘total’ has been set at an understandably high 67 ½.