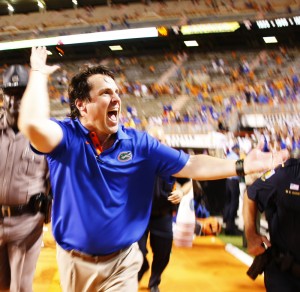 The post-Tim Tebow era hasn’t featured many enjoyable moments for Florida fans, with an 8-5 record in Urban Meyer’s final season in 2010 and a 7-6 mark in Will Muschamp’s first season last year. As a result, expectations were fairly low coming into this season, with many NCAA football betting (click here) experts seeing Georgia and South Carolina as the favorites in the SEC East.

A lackluster performance in a season-opening win over Bowling Green only served to lower expectations even further, but a couple of weeks, a couple of dominate second-half performances, and a couple of road wins can change a lot of minds.

At Texas A&M, the Gators found fearless freshman QB Johnny Manziel hard to handle in the first half, as the Aggies sprinted out to a 17-7 lead and put up more than 250 yards on their four first-half drives. But in the second half, UF’s defense made Manziel look like a man making his collegiate debut, not allowing A&M to cross midfield, much less score another point, in an eventual 20-17 Gator win.

On Saturday night at Tennessee, the defense produced another strong second-half showing in making Tyler Bray look like anything but a top NFL Draft pick and holding the Vols scoreless for the last quarter and a half. But for the first time in Muschamp’s tenure, the offense stepped up and stole the show in a big game, piling up 24 unanswered points and more than 300 yards over the last 18 and a half minutes as the Gators left Knoxville with a 37-20 win, their eighth straight in the rivalry.

Florida’s downfall over the last couple of seasons was largely due to offensive inconsistency and downright ineptitude on far too many occasions, but the ingredients are there to be highly productive. Jeff Driskel is no Tebow, but he’s showing the efficiency that John Brantley could never quite find in his two seasons as the starter, and he’s also shown the mobility that Brantley lacked. And after having a small role for three seasons, Mike Gillislee has grabbed opportunity by the horns and is on pace to be the first Florida back to rush for 1,000 yards since Ciatrick Fason in 2004. The biggest weapon, however, could be Trey Burton, who showcased Saturday night why he needs the ball in his hands on a regular basis. After making a minimal impact in the first two games, he ran 14 yards for a score in the first quarter, helped set up a third-quarter field goal with a 32-yard catch, and turned the tide in Florida’s favor with an 80-yard run to tie it at 20 late in the third. Combine that trio with a defense that has stepped up when needed in every game thus far, and this is a team that could far exceed expectations this season.

It must be noted though that the Gators have started 4-0 in each of the previous two seasons, only to go a combined 1-7 in October. And October is the make-or-break month in the Florida football schedule again this year, with games against three teams currently in the top 10 and a tricky trip to Vanderbilt, who gave the Gators a real scare in Gainesville last season. However, of their last six SEC games, the trip to Nashville is their only true road game. LSU and South Carolina both come to the Swamp, and the month ends with the annual throwdown with Georgia in Jacksonville. The fear factor in the Swamp or in big games isn’t as it was only a few years ago, but the last two weeks should serve as a big boost for Florida’s preparedness and confidence for when the even tougher tests roll around.

Is Florida back? Could they emerge as a surprise national championship contender? It’s much too soon to say that, because it could all come crashing down in October again. It will take far more to beat the likes of LSU, South Carolina, and Georgia than it did to beat A&M and Tennessee. But this is a program that’s grown used to not being down for long, and there are signs that a return to the top could be happening sooner than many expected.

8 Replies to “Are Happy Times Here Again in Gainesville?”