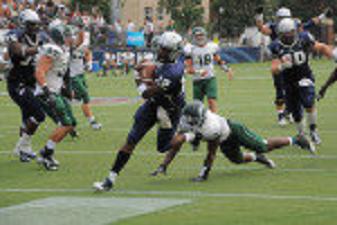 You have to go back to 1923 to find the last time that the Princeton Tigers and the Georgetown Hoyas faced off against one another. They’ll do so again on Friday night on ESPNU though, as the two teams look for leverage early in the FCS season.

The Tigers weren’t really supposed to be able to do that much this year in football, but last week’s 17-14 loss to the Lehigh Mountain Hawks proved that perhaps that might not be the case. Lehigh is ranked No. 13 in the FCS coming into the season, and it had to be stunned that Princeton was able to put up such a fight in its first game of the year.

The Hoyas have already played three games this year, losing for the first time last week against the Yale Bulldogs at home. This is the second road game of the year, and it promises to be a bit closer than the 35-14 game was at the Davidson Wildcats back on September 1st.

QB Aaron Aiken really doesn’t provide all that much of a threat in the passing game, as he has just 368 yards and two TDs in three games. However, he does have 198 yards on the ground this year, and RB Nick Campanella can be a real force between the tackles. The back has 216 yards this year and has averaged 6.2 YPC. Other rushers like Wilburn Logan, Dalen Claytor, and Brandon Durham will also tough the football as well, as those three have averaged almost 19 carries per game between them.

Georgetown is clearly the favored team for college football picks on Friday, though it must be noted that it has never won a game in this series. Princeton holds the all-time edge 5-0. This is the second straight game that the Tigers have played against a Patriot League team, and they are just 1-6 in those seven games.

2 thoughts on “Princeton, Georgetown Duke it Out on Friday Night”