“Why can’t there be some things just for me?  Is that so selfish?”

“Actually, that’s the definition of selfish.”

– Jason Alexander and Jerry Seinfeld, in “The Secret Code”

I haven’t hated anyone in a long time.

As a kid, I used to hate Reggie Jackson.  Just hate him with fervor.  Oh, and Bucky Dent too for what they did to my beloved Red Sox back in the day.

But as a grown man, I’ve put things in their proper perspective, or at least I like to think I have.  Don’t get me wrong, sports are still important to me.  I share the glory when my teams win and the heartache when they lose, but I don’t go around randomly hating people.  Okay, maybe Urban Meyer but that’s it. 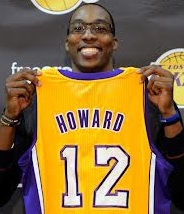 I don’t know him personally, never met him.  He might be the nicest kid around (probably not) willing to give you the shirt off his back but I really, REALLY am developing a healthy hatred for the guy… and I haven’t even seen him in a Lakers uniform yet.

The last two years for Magic fans were excruciating, so much so that I don’t care to relive the experience.  Even as his days in Orlando came to a close, Dwight fed the fire with every utterance.  At least when LeBron bid Cleveland adieu, we sensed a hint of remorse.  Nor did he drag it out for years, in contrast to the Dwight-drama Central Florida was subjected to daily.  As the story unfolded, Snake, a friend, regular reader and lifelong NBA fan, would text me, telling me how he didn’t think there could possibly be a bigger douchebag in the game than LeBron.  He was wrong.

Look, I don’t resent athletes for being multi-millionaires, nor do I slight anyone for following their dreams.  I certainly don’t hate anyone for their ability to dunk a basketball or for being an entire foot taller than me, although, in all honesty, I probably have better post moves than Dwight.

So here’s the latest.  You think Dwight would want to lay low, rehab his back after season-ending surgery and turn down any interviews that might (continue to) paint him in a negative light.  Or maybe he just can’t help himself.  In a recent interview, Howard tried to explain himself, telling ESPN’s Ric Bucher that it was never his intention for anyone not to like him, that he gave Orlando his all in trying to win a championship, that Los Angeles was his team of destiny (he hasn’t signed a long-term deal yet) and how he needed not worry about what others thought and start thinking about himself.  Like Seinfeld said, the very definition of selfish. 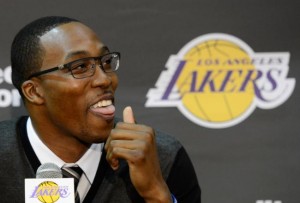 Either way, his bags are packed, his $20 million, Hollywood mansion already purchased while the echoes inside his old, Orlando home will soon match those heard throughout the Amway Center.  And so, we begin anew, with Dwight in Los Angeles, and guys named Kyle O’Quinn, Ish Smith and Moe Harkless wearing Magic uniforms, which hardly seems like a fair trade, aside from the fact that those guys actually want to be there.

I’ve never actively rooted against the Lakers, but I am left no choice.  While watching Steve Nash win his first ever NBA title would be cool, watching Dwight fall short of his first, would make me feel all giddy inside.

Don’t worry.  I’m not going to do anything rash like burn a Dwight Howard jersey outside the stadium or make myself a D12 voodoo doll to pin angrily.  But I might just buy a ticket to the March 12 Lakers game in Orlando and boo the man healthily every time he touches the ball.  After all, he does deserve that.