Let’s take a brief pause for the cause to talk about golf etiquette, shall we? 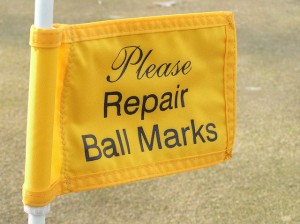 Like anything else, golf has its rules.  Don’t drive on the greens, repair your ball marks and divots and by all means, let faster people play through.  These rules might seem obvious for those who play the game on a regular basis but for those who don’t, problems arise, play slows down and the golf course could get ruined.

Even though I started playing golf in my mid-20s, I was fortunate enough to be surrounded by friends, Brotha E, Big Guy, G Mony and the Kosher Bazooka, who all taught me how to properly play the game, not only with bourbon in your cup and a cigar in your mouth, but with respect for the rules of the course.  Unfortunately, not every golfer boasts such a keen background.

One glorious Florida afternoon, I decided to hit the links by my lonesome in my never-ending attempt to score in the 80s which, once again, I failed to do.

After a shaky front nine, with no golfers in front of me and none behind – the glories of mid-week golf in Florida – I finally happened upon a foursome on the 12th green.

From afar, I could tell they were hackers, even more so than me, although my recent string of rounds in the 90s might exclude me from that underwhelming group.

I sat and waited, and waited, before hitting my approach shot as the four of them finished out their putts.  After getting up and down in three strokes, I ran into them, as expected, on the very next tee box.  Three of the four had just teed off and the fourth was seconds away from slicing his drive far out of bounds right into somebody’s backyard.

Here is where proper golf etiquette comes into play.  When a foursome recognizes they’ve got a faster, single golfer behind them, they should allow him to play through, understanding he’ll be up and gone by the time they hit their second shots. 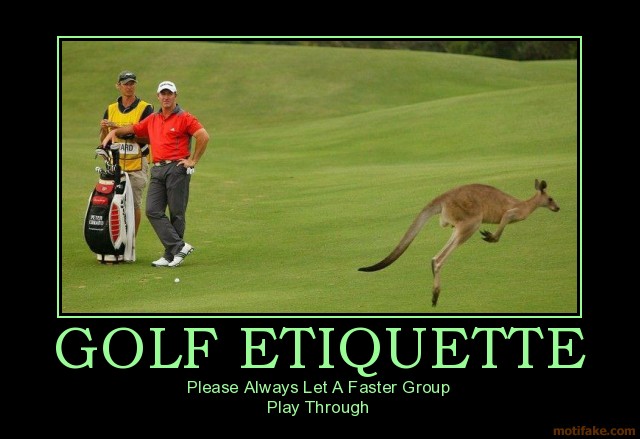 These four did not.

Since they made no such gesture, I asked them if they minded if I play through.  The gentlemen in the first cart sped off, barely acknowledging my existence.  The numbskulls in the second cart, including the one who had just ceremoniously shanked his drive into the lumberyard said “Well, they just drove off.  We kind of need to ask them.  Maybe we’ll let you play through on the next par three.”

At this point, I had a number of options, several of which involved profanity.  With the sun winding down, I was hardly about to wait for the Fantastic Four to tally their collective triple bogies before waving me through.  Instead, the non-confrontational me decided to drive past them, onto the next hole to continue playing.  They looked on in amazement, not realizing that was even an option or perhaps unaware they should have offered that I play through in the first place.

That’s what I’m here for.  To lend a helping hand to the ill-informed in their time of need.  Beginners, please pay attention to the rules of golf.  By no means am I a golf snob.  I’m as casual as the next guy (probably more so) but the rules are there to ensure enjoyment for all.  If you have any questions about these rules, feel free to swing by the USGA’s Etiquette page.

Or perhaps you should print this page and present it to the next foursome that doesn’t allow you to play through.