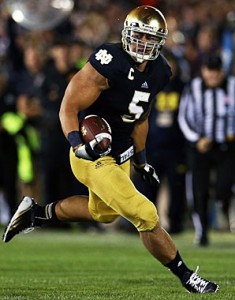 Each and every year, the Boston College Eagles and the Notre Dame Fighting Irish play in a fierce rivalry, and the games are often quite close. As 18-point favorites on the college football odds, the Fighting Irish hope that this week’s game is nowhere near as challenging as some of their games have been of late.

It really feels like Notre Dame just continues to play to the level of its opponents. Last week’s miracle escape from the Pitt Panthers was just another of the remarkable finishes this year. The Golden Domers have now escaped overtime twice this year at home, and they have won five of their nine games by a total of just 23 points.

The good news though, is that this one is going to be played on the road. When they have been away from Notre Dame Stadium this year, the Fighting Irish have played a heck of a lot better ball. They creamed both the Navy Midshipmen and Miami Hurricanes in neutral site games, and they beat both the Michigan State Spartans and Oklahoma Sooners on the road by 17 points apiece.

Boston College looks like a pushover on paper, but this is clearly the Super Bowl to it. The team has only beaten one FBS team this year, that coming in a 20-17 win over the quarterback-challenged Maryland Terrapins here at Alumni Stadium.

Still, history says that this one will be close. The Irish won by just two points last year in spite of the fact that they were 24-point favorites, and they have won their last three games in this series by an average of just 8.0 PPG.

All-time, these two have met 21 times in the past, with Notre Dame holding a 12-9 edge. The average margin of victory has been just 5.33 points per game for the Fighting Irish, and if this one stays this close this year, there is no doubt that the Eagles are going to cover the spread.