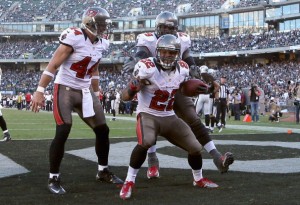 One of the most entertaining games of Week 9 of the NFL season was in Oakland, where a likely low-scoring game turned into a second-half shootout. At halftime, Oakland led Tampa Bay 10-7, but the two teams combined for 57 points in the second half in what wound up being a 42-32 win for the visitors.

Allowing the Raiders to trim an 18-point deficit to three in the late stages and then have a chance to tie or win it no doubt displeased a head coach with a defensive background, but what will have pleased him is how his offense is turning it on at the right time.

Last year didn’t make for pretty viewing on a lot of levels, including offensively. Josh Freeman regressed from 25 touchdowns and only six interceptions in 2010 to only 16 touchdowns and 22 picks in 2011, while LeGarrette Blount ran for only 781 yards after a surprising 1,000 yard season as a rookie.

To help beef up the offense, the Bucs signed two-time Pro Bowl receiver Vincent Jackson to a five-year, $55.5 million contract in the offseason, and they also drafted Boise State bowling ball Doug Martin with the 31st pick in the 2012 NFL Draft.

The results weren’t exactly immediate, as the Bucs dropped their first two home games and were 1-3 at the end of September. But they’ve since won three of four, largely thanks to an offense that’s been on fire. After notching the first 100-yard game of his NFL career in a win at Minnesota in Week 8, Martin stole the show on Sunday, rushing for a franchise-record 251 yards and four scores, and he’s now third in the league in rushing yards (794) and second in rushing touchdowns (seven).

And over the last four weeks, Freeman is on the best statistical stretch of his career, throwing for 1,257 yards, 11 touchdowns, and only one pick. Jackson, who leads the NFL in yards per catch (22.9) and is the top ten in receiving yards, touchdowns, and plays of 20+ yards, is already repaying the large investment made in him, while Mike Williams is flourishing as the #2 guy. It’s also helped Freeman that Martin, who’s third in the team is catches (20) and yards (245) is much more of a pass-catching back than Blount, who has all of 21 catches in two and a half seasons.

As up and down as the Bucs have been over the last several seasons, many fans are likely tempering their excitement, which is understandable. So for the foreseeable future, we might still see regular local TV blackouts (as will likely be the case for Sunday‘s home game against San Diego), so many hopeful viewers will have to opt for searching for a viable internet stream while they’re busy spending their ticket money at places like Party Casino. But it’s hard to argue against the potential that this offense has, with a talented young QB still yet to hit his prime, a promising young running back, and a duo of big-play receivers.

How far can this team go this year? The schedule lines up well enough that a run at a postseason berth could happen if the chips fall the right way, but even if it doesn’t, this team looks like it will be a lot of fun to watch on offense. It’s not often over the last four decades that could be said about the Bucs, but long may it continue.