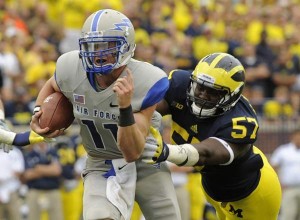 The Hawaii Warriors have quite the roadblock in front of them this coming Saturday when they take on the powerhouses that are the Air Force Falcons. While the Falcons have had their problems over the last few games, the kinks in their armor are nothing compared to what the Warriors have had this year. If they can stay the course and use their running game to their advantage, Air Force will be able to cover the college football betting odds that have them at a -23 points spread on the day.

One of Hawaii’s biggest weaknesses has to be their defense. Allowing an average of 43 points per game, hay have become the 123rd ranked team in points allowed this season. This is not good news for them, as Air Force is one of the best teams around when it comes to running. They are currently ranked number 2 in the nation when it comes to running yards per game and do not look to be slowing down. Hawaii needs to try to find a way to ground the running game and make sure they keep the yards down throughout the game. If they can do this, they just might have a chance of not only covering the spread, but squeaking out a much needed win for the team. They are way back in the conference and need every victory they can get going into the later part of the season. The same can be said of Air Force, but they are not quite as behind the eight ball as the Warriors.

With the Falcons highly favored in their game against the Warriors this week, taking Hawaii at a high point spread may be the way to go. Both options are risky, however, because of the high possibly that Air Force could blow them out. Either way, this is a game that will be interesting to watch.