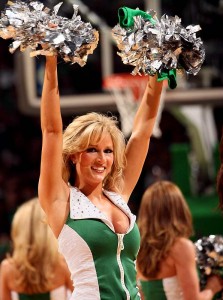 Remember Red Auerbach, who once said his Boston Celtics would never have cheerleaders on the sidelines as long as he owned the team?  Well, Auerbach passed away in 2006.  Not long after that, the Celtics had cheerleaders shaking their pom-poms all over the Fleet Center.

Far be it from me to criticize hot chicks in spandex.  I like girls; girls are good.  But not only do we have cheerleaders spread throughout professional basketball, we have mascots as well.  Lots of ‘em.   In arenas across these United States, we have gorillas dunking basketballs, head-banded fuzzy bears in Utah inexplicably doing the same thing through flaming hula hoops and now, we’re blessed with the newest addition to this nonsensical bunch of fictitious creatures: The Brooklyn Knight.

It was only a matter of time before the recently relocated Brooklyn Nets added a costumed character that, by some accounts, makes a mockery of a franchise that wants to be taken seriously.  Mascots are for college programs, not professional ones.  I’ll give the Philly Fanatic and San Diego Chicken a pass since they’ve been around nearly as long as I have but what’s the point of having some guy dressed as the Flash, Perseus, or whatever that panty-hosed freak with wings on his ears, is walking around the Golden State Warriors’ arena, frightening the crap out of little children.

If you think that’s odd, wait until you meet the Brooklyn Knight, who many an observer claim looks like the gimp from Pulp Fiction, minus the cellar gang-rape of Ving Rhames, or so we hope. 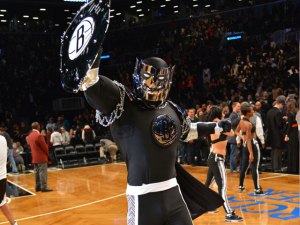 Who were the brainiacs inside the Brooklyn boardroom that decided having a masked, leather-clad, shield-wielding weirdo running around the arena was a good idea and how much are these people getting paid to do their jobs?  Apparently, Marvel Comics invented the character.  Couldn’t they have consulted Beyonce before wheeling this leather-faced Lancelot onto the court?

And what’s Brooklyn Knight even mean anyway?  Aren’t most people afraid to roam the streets of Brooklyn in the middle of the night?  It pains me to say this considering I grew up with a comic book collection that would rival your average Comic Con nerd but if the Knight is the best they could come up with, I’d love to see what was left on the cutting room floor.

So, I figured my readers could do a little better.  Since I still have a gift to give away thanks to the friendly folks at A&E Sports, I hereby present you with this challenge.

Let’s show Mikhail Prokhorov, Jay-Z  and Stan Lee that the common sports fan, sans marketing or animation background, can come up with a far more imaginative idea for his team’s new mascot.  The suggestion below that best replaces Gimpy the Brooklyn Knight will win the grand prize… and very possibly honors to become SportsChump.net’s very own mascot.