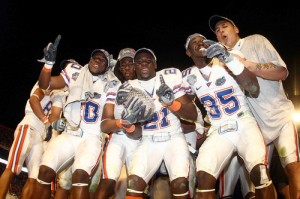 Watch me as I rile up Gator fans.  This should be pretty easy considering I’m one of them and we’re a rather excitable bunch.

Gator faithful, you can still win yourselves a national championship!

I know you’ve been running through the possibilities ever since the turnover-fest against Georgia, but consider this.  This was a year where little was expected.  You featured a second-year head coach and a run-prone, sophomore quarterback who couldn’t throw the football.  Do you remember the last time you had a combination like that?

Gator fans are now foaming at the mouth.  Heck, even I’m getting excited.

That’s right, folks, the Florida Gators, currently ranked fourth in the BCS can still play for a national title if only two things happen.

Piece of cake, right?  Here’s the only problem with those two assumptions.

The Florida Gators’ starting quarterback, Jeff Driskel, has missed the last two games due to injury. In his absence, Jacoby Brissett was average at best, completing passes but only throwing a single touchdown against patsies likes Louisiana-Lafayette and Jacksonville State.  Who knew those schools even had football programs? 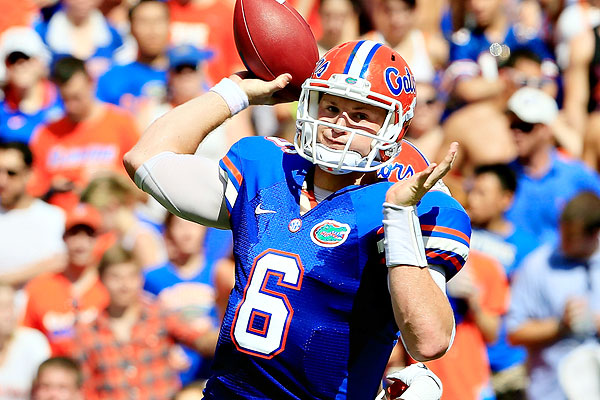 Driskel is slated to start this Saturday against Florida State and they’ll need every healthy bit of him to succeed.  The Seminoles rank first in the nation in rush defense and yards allowed per carry.  Prepare thyself, oh offensive line.  While the Gators enter this game as the higher ranked team, the Seminoles have won the last two match-ups in this series.

USC, without their starting quarterback, will also have to beat the top-ranked Fighting Irish.  The glass half full Gator recognizes this was the one game on Notre Dame’s schedule everyone thought they would lose.  The glass half empty Gator knows that was long before USC lost to the likes of Stanford, Arizona, Oregon and UCLA.

However, three of those teams were ranked so all is not yet lost.  Anything is possible.   Now please excuse Gator fan as he cleans the saliva off his keyboard.

If Florida wins in Tallahassee, rest assured that every Gator fan in America will be watching the Notre Dame game intently, while burning Lou Holtz dolls in effigy.  You can also rest assured that not a single Gator fan will tune in to that game if the orange and blue leave Tally with an L.

Regardless of Saturday’s outcomes, Alabama will still play Georgia in the SEC championship game.  One of those teams has to lose.  To the dismay of everyone living outside the southeast, a Florida victory and a Notre Dame loss means we may have our second, consecutive BCS title game featuring two Southeastern Conference teams, one which again failed to win their own division.  This year that team would be Florida, undeserving or not. 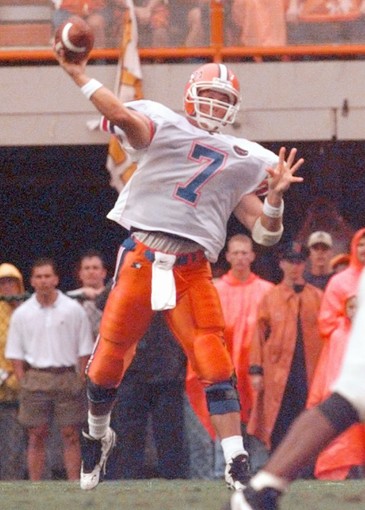 So heads up, Gators fans.  Keep hope alive.  Remember losing to FSU in 1996 and seeing all championship hopes dashed until Ohio State knocked off Jake Plummer’s Arizona State Sun Devils in the Rose Bowl a month later, setting up a rematch with the ‘Noles in the Sugar Bowl.  And I know you all remember UCLA shocking USC the same afternoon the Gators handled their business against Arkansas in the 2006 SEC Championship Game.

Stranger things have happened, my friends.  After all, this is college football.

So, my fellow Gators fans, count not your turkeys before they gobble but do enjoy a fun Thanksgiving holiday thinking about what could be.  Break down Seminole game film as best you can, pray your beloved Gators are doing the same and then root against Notre Dame with all your might.  If you do that, you could be staring another national championship in the face.

And that’s something to be thankful for.

39 Replies to “Florida Gators to play for a national championship in two easy steps: So you’re saying there’s a chance”