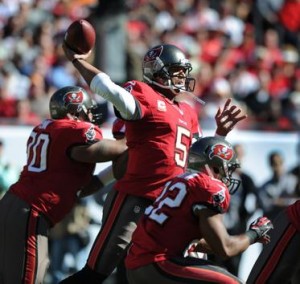 There are few things in sports as frustrating as losing a game that you know you could and should have won, especially at home. That was the case on Sunday in Tampa, as the Buccaneers fell 24-23 to Atlanta to see their four-game winning streak come to a disappointing halt.

There’s no shame in losing to the Falcons, who are tied with the Texans for the NFL’s best record at 10-1. And the outcome was no surprise, as Sportsbetting.ag and other sportsbooks had the NFC South leaders favored to win a close one.

But it’s disappointing nonetheless, considering that it should have been a W. Offensively, having to settle for a Connor Barth field goal after getting down to the 1 in the second quarter was key, and so was having to settle for three other field goal attempts in Atlanta territory, including an unsuccessful 56-yard attempt that’d have put Tampa ahead late in the fourth quarter. Defensively, the Bucs held Michael Turner to only 17 yards on 13 carries, but Atlanta still racked up 424 yards and seemingly responded every time the Bucs had momentum or had a chance to grab it.

All in all, it adds up to a missed opportunity to move into the NFC’s second wildcard slot, with Seattle’s last-second loss at Miami and Minnesota’s defeat at Chicago. With five games left, all three teams hold 6-5 records, but the tiebreakers in the NFL playoff standings are in favor of the Seahawks, who have a better winning percentage in conference games than the Bucs and beat the Vikings in Week 9.

If the Bucs miss out on the postseason, it could be down to a slew of missed chances similar to Sunday’s, as they’ve been tied or ahead at some point in the second half in each of their five losses this season.

But to toss in a bit of perspective, this is still a young, developing team with a first-year head coach, and even with the close losses, Tampa’s right in the postseason mix heading into December, which few would have expected after their 2-4 start. Can they stay there until the end? Depending on how things shake out, they could get into the playoffs at 9-7, but 9-7 won’t come easily. Both of their last two home games, against 4-7 Philadelphia (Week 14) and 4-6-1 St. Louis (Week 16), should be wins, but they’ll need to win at least one, if not more, on the road against Denver (Week 13), New Orleans (Week 15), and Atlanta (Week 17).

8 Replies to “Bucs Lose Another Close One, But Postseason Hopes Remain Intact”