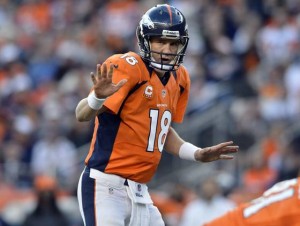 It’s a tale of two season when you look at the Denver Broncos and Oakland Raiders heading into their primetime matchup Thursday night on the NFL Network.

The Broncos are riding high after winning their seventh straight game and clinching the AFC West for a second-consecutive year last week. As for the Raiders, things aren’t quite as rosy. It’s been another forgetful season for the silver-and-black. Oakland has lost its last five games to drop to 3-8 and see their playoff hopes erased for a 10th straight season.

Denver is a 10.5-point favorite over the Raiders, according to this week’s NFL odds. The over/under is listed at 48.5 points. These two teams met earlier this year and it was no match. On Sept. 30 in Denver, the Broncos blitzed the Raiders 37-6.

Broncos’ quarterback Peyton Manning has to be licking his chops thinking about facing the dreadful defensive unit of the Raiders. According to NFL.com, Oakland has allowed 31.3 points a game this season—more than any other team in the league. The Raiders are equally atrocious against the run (130.4 yards a game, 28th) and the pass (256.5 yards a game, 25th).

In the season’s first matchup, Manning torched the Raiders by going 30 of 38 for 338 yards and three touchdowns.

On the other side of the ball, things don’t look much better for the Raiders. Quarterback Carson Palmer has had a decent enough season, but Oakland has been hamstrung by the inability to run the ball with any consistency. The Raiders rank 29th in the NFL in rushing with just 82.8 yards a game.

They will face a Denver defensive unit that ranks third in the NFL with just 308.2 yards a game allowed.

Oakland appears to have mailed it in this season and, given the discrepancy in production on both sides of the ball, this one could turn ugly quickly. Look for Denver, which has the incentive of playing for a better a playoff seed, to jump out early in this one and cruise to the cover.