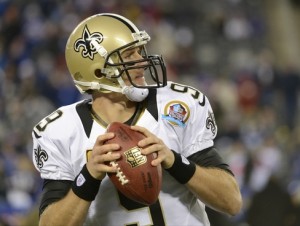 It was a tough week 14 for both the Tampa Bay Buccaneers and New Orleans Saints, as both teams saw losses that put their playoff hopes in jeopardy. Each team needs a win big time in week 15 when they play each other in New Orleans and will stop at nothing to get the job done. As it stands now, the NFL odds are firmly on the Saints side, as the Buccaneers have been given a three point handicap.

As it pertains to how the game will be played, this will be an offensive showdown of the highest proportions. Neither team has a particularly strong defense and typically wins games when the ball is in their hands. This is especially true with the Saints as they have one of the top three quarterbacks in the league with Drew Brees. He has had a stand out season even if his team has not and he wants to fight until the bitter end of the year. You can bet he will come out swinging this week especially because it is a division game.

The same can be said of the Buccaneers, who have seen a little bit of a resurgence this season. Quarterback Josh Freeman will need to play effectively in the game if the team wants to get a win on the day. He will need to find ways to get the ball in the hands of Doug Martin, Mike Williams and Vincent Jackson. If this does happen, then the team will be able to give the Saints a run for their money this week.

When it comes to potential barn burners this coming week, one cannot look past the New Orleans Saints VS the Tampa Bay Buccaneers. The matchup will basically come down to which team can move the ball down the field more effectively.

Are you thinking of doing some betting online on an upcoming football fixture? Why not come and check out the latest nfl betting tips and odds at bwin today.