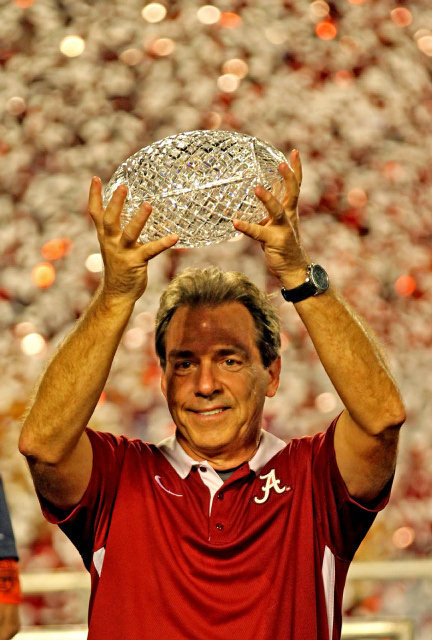 In the final moments of this year’s college football season, here’s some food for thought.  When was the last time we had an unranked team finish the regular season ranked number one, as well as the pre-season number one team ending up unranked?  I’m guessing never in the history of the sport.  I’ll let you decide what sort of mockery that makes out of pre-season college football pools.

Earlier this season, I asked you all to pick one team to win this year’s national championship.  Regardless of the shellacking Alabama laid on them Monday night, not a single person picked Notre Dame as a contender.  I guess not many Irish Catholics are reading the Chump.

Either way, what the Notre Dame program pulled off this year is the perfect example of why college football is still the best of all sports.  Not even the BCS can screw that up.  One loss and you’re done, the constant season-long, shuffling of teams atop the rankings with any hopes of a championship dashed with a single mistake.  What the masses are convinced is a foregone conclusion one weekend inevitably gets turned on its head for four glorious months, with nothing but emotional ups and downs through the entire ride, or tide in this year’s case.

Man, I can’t wait ‘til next August.

Speaking of the glory that is college football, be honest, how many times did you see this Clowney hit because if you haven’t, here it comes again.

I must have watched post-game highlights of this tackle at least a hundred times and it STILL wasn’t enough.

Jadeveon Clowney is only a sophomore at the University of South Carolina but he is clearly a man among boys.  He’s slowly becoming a cult figure in Columbia.  In fact, I can’t recall a single hit prompting so many people to proclaim a player would be taken number one WHEN HE’S NOT EVEN ELIGIBLE FOR THE DRAFT FOR ANOTHER YEAR.

I’ve talked to several people who were at this game, since it was played in Tampa.  They told me the stadium erupted when Clowney deflated Vincent Smith.  One local radio announcer called it the hardest hit he had seen in his thirty plus years of watching football.  Some people were actually concerned Smith’s head had been detached from his body.

It’s okay.  Click on the video again.  I know you want to.

I’m not sure how many of you caught Ray Lewis’ last game in Baltimore on Sunday.  I’m guessing the lot of you did considering the NFL playoffs are among us.  Immediately prior to this post-season, the seventeen-year veteran told his teammates that he would be retiring at the end of the year, what he referred to as his “last ride.”  That afternoon, the Ravens showed up in full force to honor his legacy, besting the hot Indianapolis Colts 24-9. Not surprisingly, Lewis led the team with 13 tackles. 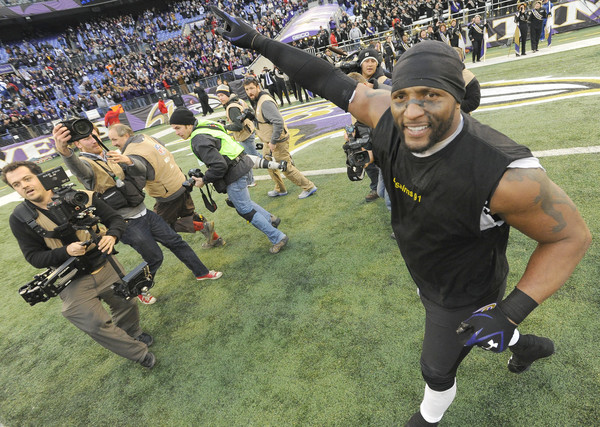 Shortly after the clock ticked to zero, an emotional Lewis was brought to tears.  Soon afterwards, he was congratulated by teammates, kissed his children on the sidelines then circled the field for a well-deserved victory lap in front of thousands of cheering fans, many of whom bore his jersey.

Lewis, the last remaining member of the Ravens team that won the Super Bowl in 2000, redefined the linebacker position.  He was as dominant on the field he was motivational off it.

He’s a 12-time pro bowler and sits comfortably in the discussion of the greatest defensive players ever.  If you didn’t get at least a little choked up watching him wave good-bye to the thousands of fans screaming his name, you’re simply not a fan of the sport and I suggest you take up crochet or something.

The game is better for Lewis having played it and his presence will be sorely missed.

We’ll see you in Canton in five, Ray.

I still haven’t grown tired of writing about how bad the Lakers are.  I feel like a full-bellied vulture picking at the road-side body of a decaying carcass with a blissful smile on my face. 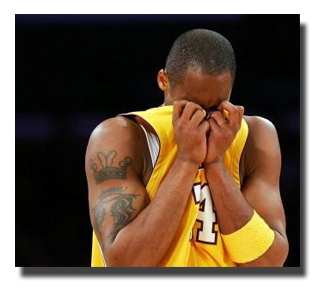 As I mentioned last month, I’m generally not a hater but I am taking particular joy in watching this Lakers team implode.  It’s my right as a Magic fan to do so.

This Lakers team is so inexplicably bad (how bad are they?) that even the greatest player of the last decade has no answer for their woes.

Think about it.  This team has a combined 33 All-Star Game appearances in their starting lineup and they are 15-18.  That’s like the Beatles suddenly forgetting how to play their instruments.  By the way, 15-18 misses the playoffs if they were to begin today.

These Lakers are disturbingly bad.  Their badness defies logic.  They just lost at home to Denver and Philadelphia and with all due respect to those two teams, the Lakers have no business losing at home to either of them.

And now Dwight Howard, always one to open his mouth and say something inept, has told the media that this team doesn’t have to like each other to play well, they just have to go out and do it.  As much talent as is on that team, I’m beginning to think that’s no longer possible.  They’re like a time warp stuck in a vacuum of absolute defenselessness.  They are currently allowing 100.8 points per game which is 26th out of a 30-team league.

No Lakers fan has ever walked into the Staples Center with a paper bag over their head (insert Dyan Cannon joke here) but it’s something they might want to consider because this team is an absolute train wreck. 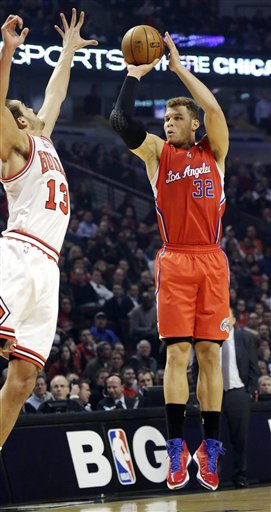 Okay, I know the Clippers just rattled off a seventeen-game winning streak, the most in franchise history.  I know they hold one of the best records in the NBA.  But I am definitely not ready to crown these guys.  Not even close.

Come the NBA playoffs, in a seven-game series, championship teams have to be able to score in the half-court set.  It’s one of the few constants in the sports universe.  Yes, Chris Paul is one of the best playmakers in the game but when he kicks the ball out after being triple-teamed to a wide open Blake Griffin who’s standing 15 feet from the basket, I need to know whether he can hit that jump shot consistently.  I take that back, I already know.  The guy can jump out of the gym.  He’s the game’s most dynamic dunker but I’m not convinced he can nail that shot with consistency.

Blake, it’s time to take a break from all those Kia, Subway and GameFly commercials and take about 500 daily jumpers from 13-17 feet.  Only then will your game become well-rounded and your chances of winning an NBA championship come closer to fruition.

I had a bad feeling about the Sugar Bowl this year.  Little did I know how bad it would be. 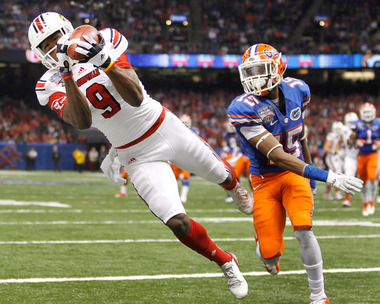 The third ranked Florida Gators went up against their former defensive coordinator Charlie Strong and his 21st ranked Louisville Cardinals, a team that was chomping at the bit to prove their worth.  The only problem is the Gators forgot to show up.  Or at least Louisville made it look that way.

Strong’s far, more prepared Cardinals made a mockery out of the Gators in essentially every aspect of the game.  The 33-23 final score is no indication of how badly Florida was dominated.  The Gators, who at one point this season were poised to play for a national championship, seemed to be going through the motions that evening, while on the opposite sidelines, Strong had his boys ready to go.

Perhaps the Gators felt they were just better than Louisville, which they weren’t, at least on that night.  Perhaps they felt the game was beneath them, that they could just show up and be handed a victory.  Or maybe they had one too many hand grenades on Bourbon Street the night before.  Either way, Florida’s performance is something Will Muschamp needs to address this off-season, for what many thought might be the pre-season favorite to win next year’s national championship showed nothing to make anyone believe they’ll be anywhere close.

One of the most depressing things in sports comes when we don’t get to see how truly great a player can be when they fall to injury.  That’s what happened this Sunday. 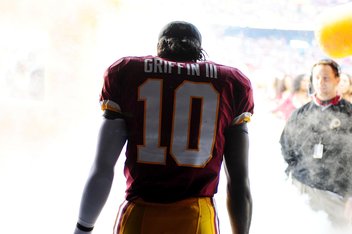 The football gods gave us a gimpy Robert Griffin and it cost the Redskins the game, and their season.  That’s not to say the Seattle Seahawks wouldn’t have won the game with a healthy RGIII but it would have been much more highly contested in the end had he been 100%.

Why, oh why, did you not allow us to see Robert Griffin at full health in these playoffs?   By the time the fourth quarter rolled around, Griffin could barely walk from a knee injury he had sustained a few weeks earlier and aggravated again that afternoon.  In the end Seattle’s defense was just too much and Griffin limped off the field defeated.  Another rookie quarterback, Russell Wilson advanced in his stead.

I guess we’ll have to wait until next season to watch RGIII again.  Hopefully he’ll return in full health and we have plenty more years to watch this guy play.  It’s just a shame we don’t get to see him any more this season.

Now let the questioning of whether he should have even played in that game commence.

40 Replies to “Hail or Rail Scale VI: Jadeveon Clowney, Ray Lewis, the Florida Gators and who else but the Los Angeles Lakers”