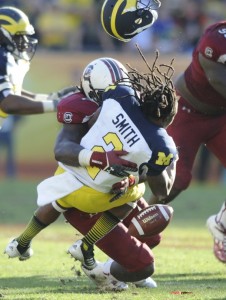 A friend and I were driving around town last week listening to the local broadcast of the Outback Bowl.  Even though I live in Tampa and he was just visiting, he and I determined that bowl game, which featured neither of our alma maters, was not worth the price of admission.  Sure, we missed the nastiest hit of the decade but we made up for it by watching it repeatedly on SportsCenter afterwards.

After South Carolina scored a fourth-quarter touchdown, giving them a five point lead, Michigan got the ball back with limited time to score.  When it appeared Michigan might make one last push downfield, one of the two broadcasters said, on live radio, that all the Wolverines needed, was to get into field goal range.  Keep in mind, they were down by five.  Field goals count for three.  The other announcer quickly corrected him.

A similar thing happened this Sunday during the Patriots-Texans game.  Even though Houston was getting surgically incised by New England for most of the game, the Texans still had a chance to put some points on the board late.  Coach-turned-analyst Brian Billick said, again, on live television, that the Texans could still get into field goal range, as if three points would matter at that point.  Houston was down by 13.  They needed two touchdowns, not a field goal. 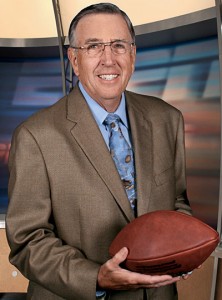 I’m not suggesting that being a play-by-play guy is an easy job but as fans, I don’t think it’s too much to ask that our announcers have a firm grasp of simple mathematics.  Paying attention to the game also helps.  I can’t imagine how many beer-soaked football fans, watching in their living rooms around the country, looked at each other dumbfounded, asking what the hell Billick was talking about and wondering whether they could do his job better themselves.

Brent Musburger fawning over a quarterback’s girlfriend, or Jon Gruden never saying a bad word about anyone, is a far cry from a former Super Bowl winning coach blissfully unaware that a field goal does a losing team no good when they’re down by 13 with time expiring.

Perhaps it’s time for the major networks to buy their high-paid announcers pocket calculators so they can properly inform their viewers what teams need to do to steal a victory… or maybe we should just turn down the volume knob once and for all.