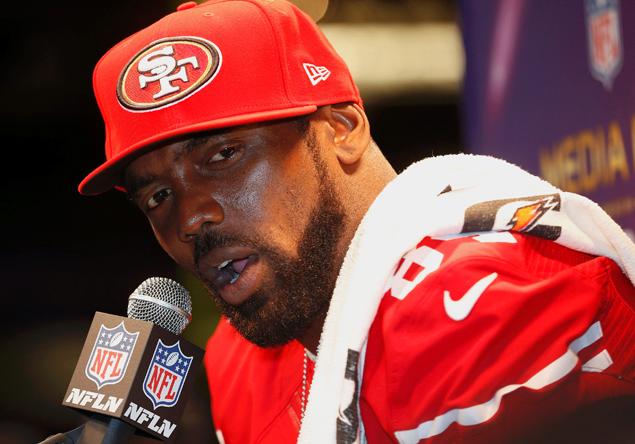 So Randy Moss thinks he’s the best wide receiver ever to play in the NFL.  It’s hard to imagine any self-respecting football fan not putting him second all-time, behind only Jerry Rice, but the best ever?  That’s a little tougher to justify.  Moss ranks second all-time in career receiving touchdowns (39 behind Rice) and third in receiving yards (behind Terrell Owens and a cool 7,000 behind Rice).  When asked where he thinks he ranks during the annual Super Bowl Media Day frenzy, Moss self-glossed by explaining he doesn’t “live on numbers, he lives on impact.”  Considering, Rice has four Super Bowl rings to Moss’ zero, I’d say he ranks behind Rice in that category as well.  We’ll see if his ‘impact’ narrows that gap on Sunday.  Even in victory, however, there’s still a long road to number one, unless of course he somehow manages to catch 40 touchdowns. 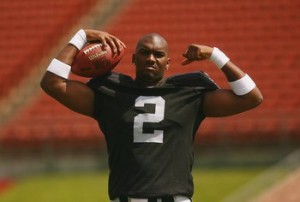 Should it surprise anyone who has followed the soap opera that is the New York Jets that they are entertaining the idea of bringing in JaMarcus Russell at the quarterback position?  The 300-plus pound, LSU-product is commonly considered the biggest (literally) bust in NFL Draft history.  Oh, and in case you were keeping score at home, Russell has as many career touchdown passes as a soon-to-be, former Jets quarterback by the name of Tim Tebow.  Last year, the Jets thought it wise to bring in Tebow, who rarely played, to challenge Mark Sanchez, who eventually lost his starting position to Greg McIlroy.  Confused yet?  That’s okay, apparently so are the Jets.  According to one source, the Jets have had “very exploratory talks” about signing Russell.  Didn’t they just go through this last year?  Somewhere, the recently-fired general manager Mike Tannenbaum has to be laughing. 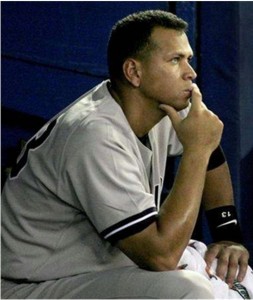 Yet another report has surfaced linking professional baseball players to performance enhancing drugs.  Shocker!  This time around, the Miami New Times acquired information from a South Florida medical clinic citing that Alex Rodriguez, Nelson Cruz and others were among players treated by the facility.  In response to these latest reports, Major League Baseball issued a statement saying they “are always extremely disappointed to learn of potential links between players and the use of performance-enhancing substances” and that these newest findings “provide evidence of the comprehensive nature of [their] anti-drug efforts.”  If that’s the case, then why did the Miami New Times break the story?  I’d like to know how many people Major League Baseball currently employs in its revolutionary, anti-drug task force because none of us are convinced Commissioner Selig is doing his best to clean up the game. 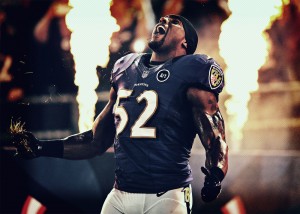 Sports Illustrated is set to come out with a story linking Ray Lewis to PEDs.  The issue will hit newsstands Feb. 4, one day after the Super Bowl.  Both Lewis and the Ravens have obviously denied any such accusations.  One Ravens spokesperson said “Ray has been randomly tested for banned substances and has never failed a test. We have never been notified of a failed test. He has never been notified of a failed test.”  If we’ve learned anything from watching Oprah, it’s that clean drug tests don’t mean a thing.  By that, I’m not suggesting Lewis took or didn’t take.  Like most sports fans, I don’t really care.  At this point, however, this looks more like a desperate act by Sports Illustrated to clear their name after Deadspin absolutely lambasted their coverage of the Manti Te’o story, in which they never considered investigating whether Te’o’s “girlfriend” actually existed.  Someone should probably tell Sports Illustrated that nobody reads their magazine anymore anyway. 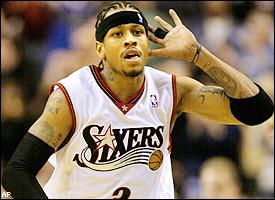 Allen Iverson wants back in the NBA… again.   He recently turned down an offer from the Dallas Maverick’s D-League team to join their squad.  Iverson was quoted as saying his “dream has always been to complete [his] legacy in the NBA.”  The last time we saw Iverson in the league, he was getting crossed over by players far younger and quicker than him, just like he used to do to others back in the day.  I understand he’s suffering from a lack of closure but someone should probably inform him his legacy IS complete.  He’s a four-time scoring champion, a former MVP, had one of the coolest nicknames ever and, for better or for worse, he single-handedly made the league hip-hop.  Maybe that’s something the Answer will ultimately understand when he’s inducted into Springfield on the very first ballot.

27 Replies to “They Said What, Vol. 5 starring the (second) greatest wide receiver ever, more alleged drug use in sports and the potential reemergence of JaMarcus Russell and Allen Iverson”