We interrupt your Super Bowl coverage for a brief message.

Certain behavior is not without consequence.  Belittling your fellow man, showing up to work late without an excuse and now… this.  Please be seated.

Due to an early doctor’s appointment the other morning, I decided to crash at my folks’ place after a long night’s work.  Their residence was considerably closer to the white-cloaked man who was scheduled to cure my back-aching woes at sun-up.

While readying myself for bed, I opened up their refrigerator door in search of a cool glass of water.  That’s where I found something I’m not sure I’ve ever seen before.

Man, I’m gonna feel bad about doing this but it’s for their own good. 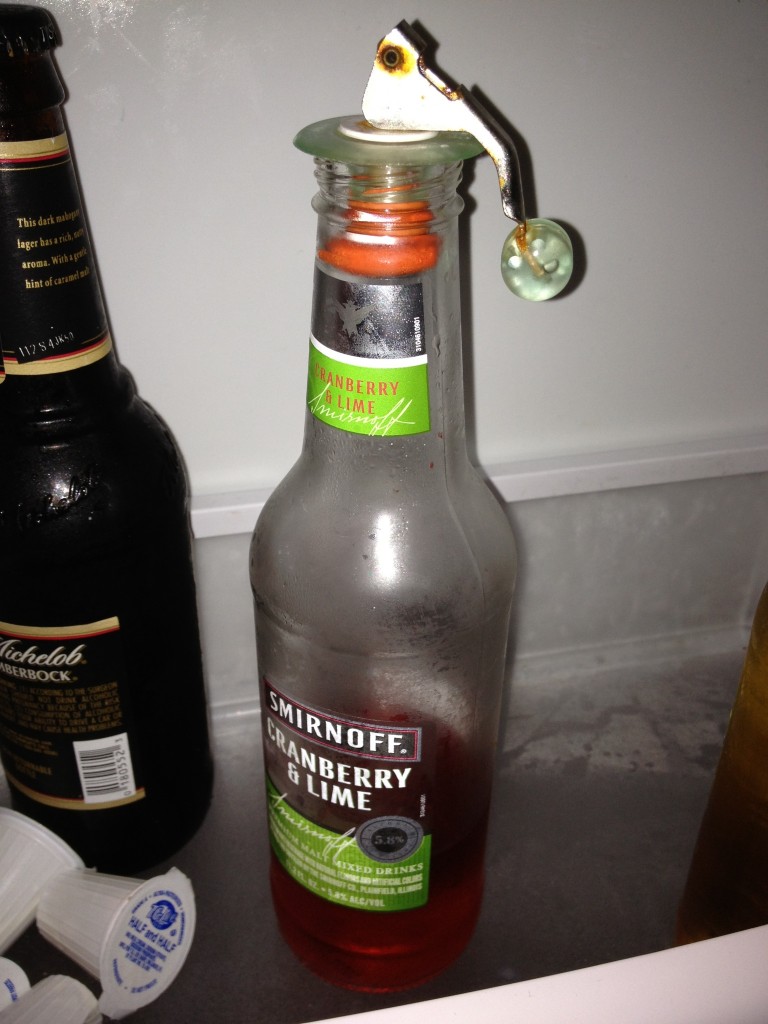 It’s bad enough my stepfather drinks cranberry-lime wine coolers on the regular.  Look, I’m down for the occasional wine cooler.  I like to party.  I live in Florida.  It’s hot out.  At times, they’re refreshing.

But when I opened the fridge, not only did I find a wine cooler three-quarters emptied  in the side door panel but I discovered that a wine stopper had been strategically placed in the neck of the bottle to preserve the little that someone (God, I’m hoping this was mom) was unable to finish.

I haven’t purchased a wine cooler in a while but I’m pretty sure they cost about eighty-nine cents a pop.  I’m all for frugality but there comes a point where it’s probably okay to go ahead and toss the last sip of backwash trapped in that bottle of Smirnoff.

Just to be clear, because I know you’re as confounded as I, this was essentially an empty bottle, without even a gulp-full of a wine cooler, whose remnants were being saved with a wine stopper.  And the funny thing was, the wine stopper wasn’t even placed on the bottle correctly to preserve the carbonation, meaning that when my stepdad comes home after a hard day’s work, seeking something to quench his thirst one evening in the near future, he’ll be disappointed when he takes a swig from his not-so carefully preserved, malt beverage to find it flat and tasting worse than when he first opened it.

Then, of course, he’ll probably just open another that he won’t finish, improperly cork it and lather, rinse, repeat; a vicious cycle of wine cooler unusedness.

I’m so embarrassed.  Where have I gone wrong?

Ordinarily, I would never do this but certain deeds cannot go unpunished.  I’m only here to help.

46 Replies to “The half-empty wine cooler: A tale of unfortunate fiction”