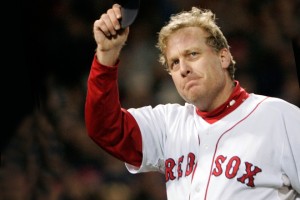 Curt Schilling is a lightning rod.  You either love him or you hate him.

Growing up a Red Sox fan, I obviously loved Schil.  Not only did he bring the Arizona Diamondbacks their only World Series title, he did the same in Boston, his bloodied sock bringing two championships to a city that hadn’t seen one in nearly a century.  For that reason alone, Schilling should be in the Hall of Fame.  Feel free to discuss amongst yourselves.

But recently, Schilling dropped a bomb larger than any ticker-tape parade.

Since retiring, Curt Schilling has become an analyst for ESPN.  His outspokenness makes him a must watch considering we never know what’s he’s going to say next.  He’s opinionated and crass but also honest and sincere in his convictions, something we lack from many of our sports analysts these days.

On Colin Cowherd’s daily radio broadcast, Schilling told America that, towards the end of his career as his health started to decline, people within the Red Sox organization encouraged him to use performance enhancing drugs.

Stop… the damn… presses!  The needle on the record just scratched and the music has come to a screeching halt. 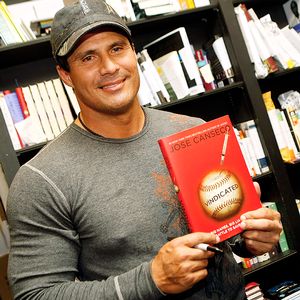 This isn’t Jose Canseco bringing a pocket full of needles into a locker room asking if anyone wants a taste.  This isn’t Alex Rodriguez’s Dominican cousin bringing him a quick fix in a brown, paper bag.  And this isn’t your old college roommate bringing over a bag of weed.  This is a team, a professional sports franchise, openly encouraging its roster to break the game’s rules by supplying them with illicit drugs.

Suddenly Bud Selig has a much bigger problem on his hands, one he’s ignored since they first etched his name on his office window door.  Chickens, meet roost.

Look, at this point, no story that emerges from a sport as dirty as professional cycling should ever surprise us.  Lance Armstrong’s sitting in a corner somewhere saying “Damn, that sport’s dirty.”  But a franchise supplying its very own players with steroids?  That’s big fucking news.

Selig now has some serious decisions to make.  If he wants to man up and continue his personal crusade against all those who broke his law, then he better come down on the Red Sox and come down hard.  I’m talking Roger Goodell-New Orleans Saints hard.  How could the Boston Red Sox not be investigated after Schilling’s allegations?

If Selig can somehow prove that high-ranking officials within the Red Sox organization encouraged their players to take drugs to enhance their performance, why shouldn’t they be penalized?  Players are suspended fifty games for their first violation.  If the Sox distributed PEDs to three of their players, that’s a season worth of suspensions right there.  That is, of course, until Detective Selig finds out that other organizations were doing the same thing.  We wouldn’t have enough teams to field a season.  But hey, Selig’s cancelled the season before so why not do it again, this time for a far more valid reason? 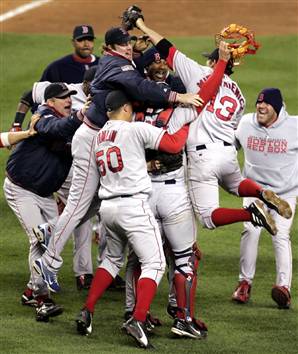 Perhaps Selig should consider stripping Boston of their championships.  (Hang on, the entire city just hopped in a bus to drive south and kick my ass).  But what good would that do?  Reggie Bush was stripped of his 2005 Heisman Trophy but anyone who watched him play football that year knows he was the best player around.  Similarly, in 2004 and 2007, the Boston Red Sox were the best juiced team in a league full of juicers.

It’s really no surprise that news like this has leaked.  It’s just surprising that it took this long.  After all, teams are out to turn a profit just as players look to sign that big contract.  If baseballs travelling 500 feet puts butts in the seats, why wouldn’t teams employ a staff of locker room, drug-pushers to ensure that would happen?

In the 1980s, President Ronald Reagan’s “Just Say No” campaign focused on combatting the supply side of the drug issue, cracking down on cartels around the globe.  Perhaps it’s time for Commissioner Selig to adopt that strategy by focusing not only on the users but on his very own baseball teams that are supplying them in the first place.