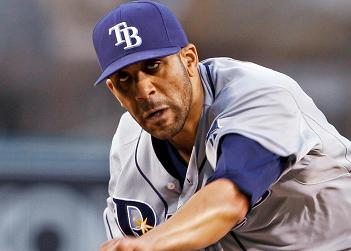 The start of the 2013 MLB season is little more than a week away, and while the San Francisco Giants come in as champs after capturing a second World Series title in three seasons, arguably the biggest preseason buzz is centered around the AL East, which is set for yet another exciting division race.

After being mired in mediocrity for years, the Toronto Blue Jays are set to make an instant leap to championship contender after making a plethora of big moves in the offseason. According to Unibet betting, the Blue Jays are the favorite in the AL, but the Yankees and Orioles, who finished 1-2 last season, aren’t going anywhere, while the Red Sox have the talent to rebound from a terrible 2012 if everything comes together under new manager John Farrell.

However, it’d be very unwise to sleep on the Tampa Bay Rays, who were in the playoff hunt deep into last season and should be once again, if they can overcome the loss of several notable names from last year’s 90-72 team.

Pitcher James Shields departed in a trade with Kansas City that landed a couple of highly-touted prospects, while B.J. Upton swapped the AL East for the NL East, signing a five-year, $75 million deal with Atlanta, where he’ll patrol the outfield with brother Justin.

While those were the two most prominent departures by name, several other important pieces from the 2012 team are now elsewhere. Wade Davis, who was excellent last season after moving from the rotation to the bullpen, also departed in the Shields trade, while they also parted ways with two other key relievers, as J.P. Howell signed a one-year deal with the Dodgers and Burke Badenhop was traded to the Brewers. And Jeff Keppinger, who hit .325 in 115 games, parlayed his excellent season into a three-year, $12 million deal with the White Sox.

Despite the numerous departures, the potential to contend is as high as ever. The hits to the pitching staff are significant, but the rotation and bullpen shouldn’t see much of a drop-off, if any. It doesn’t hurt to have the reigning AL Cy Young Award winner to turn to, but beyond David Price, the Rays have a trio of talented young starters in Alex Cobb, Jeremy Hellickson, and Matt Moore that ensure the rotation won’t be lacking in quality depth. The fifth starter slot is still up for grabs, but there are two experienced hurlers vying for the position in Jeff Niemann, who missed much of last season with a fractured leg, and 32-year-old Roberto Hernandez, who is looking to rediscover the form that saw him win 19 games in 2007 as the 23-year-old Fausto Carmona.

Runs will be hard to come early on for opponents, and they’ll be even harder to come by in the late innings thanks to a bullpen led by closer Fernando Rodney, who posted a 0.60 ERA and 48 saves last season, and Jake McGee, who was 5-2 with a 1.95 ERA in 69 appearances.

What undid Tampa Bay’s hopes last season, and what is ultimately the big question mark coming into this season, is the offense. Herculean efforts won’t be required, but they can’t afford to stink up the joint as often as they did last season and waste too many good pitching performances. The additions of infielders Kelly Johnson, Yunel Escobar, and James Loney won’t make headlines, but all three know how to handle the bat and could help take some of the pressure off of Evan Longoria and Ben Zobrist to be the leading run producers. Even the offense at its best won’t stack up with their AL East rivals, but even modest improvement in consistency at the plate will boost the Rays’ chances to contend.

Of course, it can’t be overlooked that the Rays have one of the best managers in the business in Joe Madden, and given how well the Rays have held their own in such a brutal division over the last several seasons, you can guarantee that this team won’t be intimidated by anyone. While the other teams in the AL East boast bigger names, bigger names, and bigger expectations, it should be a surprise to no one if the Rays do some serious spoiling this season.