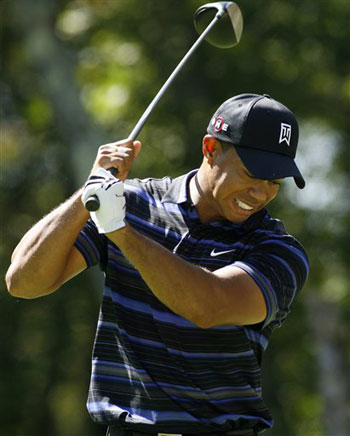 Golf is a four-letter word.  So is fuck.  When I’m on the golf course, those four-letter words go hand in hand as often as “Jack,” “Coke” and “FORE!”  It’s the nature of the beast.  This weekend, Tiger Woods showed us again why no one, not even the world’s greatest golfer, is immune to a little hissy fit.

After inclement weather pushed Sunday’s final round of the Arnold Palmer Invitational (the tournament formerly known as Bay Hill) to Monday, Tiger held a comfortable lead most of us knew he would not relinquish, not even with tee shots like the one he hit on the eighth hole.

Up four strokes, Tiger’s tee shot landed right behind a tree, giving him no clear look at the green.  Tiger recognized this as soon as he approached his ball and let out a short but rather effective “Fuck!” for all to hear.  Again, it’s happened to the best, and worst, of us.

The only problem is, when we hit a ball into the woods and ultimately drop an F-bomb, there aren’t millions of people watching.  Listen to the clip below as the announcers disapprove of Tiger’s potty mouth.

Get ‘em, boys, as if Tiger gives a flying “fuck” what you have to say about him and his choice of words.

I can’t imagine what those announcers would say if they ever heard me play eighteen.  My rounds make a Quentin Tarantino film look like Sesame Street.

I’m pretty lenient when it comes to foul language on the course.  I adhere to the George Carlin school of thought, that there is no such thing as bad words, only bad intentions. 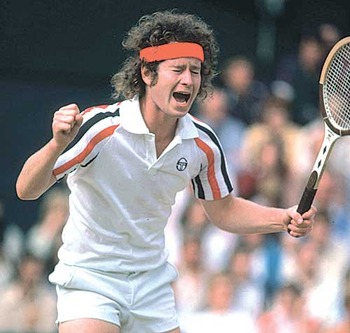 So what are we to make of Tiger’s tantrums?  Are they inappropriate, a sign of immaturity, crassness, a little too McEnroe-y for his own good or are they just a sign of a man showing emotion in a very difficult sport?  Should Tiger tone it down or should we all lighten up?

And for the record, where is the PGA Tour during all of this?  Why can’t they fine golfers (yes, even Tiger) for the use of profanity on the golf course when there are fans, particularly kids, in listening distance?  There’s already a dress code, so why not a curse code?  Not that $25,000 means that much to Tiger but there’s nothing wrong with cleaning up the sport with a healthy fine and a large bar of soap, if they were so inclined.

Personally, I’m not offended by profanity, as long as it’s used emphatically and not egregiously.   Like fighting in hockey or posterizing dunks in hoops, I think it adds to the appeal of the sport.  Plus, it’s real.  That’s what made the film Happy Gilmore so ironic.  Sandler’s character was the antithesis of what we expect to see on a golf course.

But I’m also not a parent trying to shield his kids from the profanity of others.

I’m pretty sure most eight year olds have heard a bad word uttered somewhere along the way.  As long as parents are educated, caring and not stuffy enough to explain he didn’t mean anything by it, I’m sure Tiger’s tirades won’t scar a child for life.

Or just have your kid pick up a golf club.  In no time at all, he’ll understand why cursing is, and always will be, an inherent part of the sport.