“Nothing about playing table games in a casino is anything other than gambling as entertainment.  On the other hand, risking money while possessing an edge, and while exercising prudent risk management, makes someone a trader.” 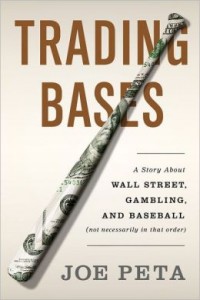 Such is the case with Joe Peta’s Trading Bases: A Story about Wall Street, Gambling and Baseball (not necessarily in that order).

Peta is a former high-stakes, Wall Street broker.  He’s also passionate about his baseball.  One afternoon in 2011, Peta was struck by an ambulance in downtown Manhattan.  He was left in a wheelchair and summarily fired from his position.  He’s quick to point out he was not fired because of his injury, however, they did “roll him off the trading floor.”

An avid sports fan who used to “treat the arrival of the new issue of Sports Illustrated like a weekly holiday,” Peta decided to use his fortune, and new misfortune, along with his affinity for both numbers and baseball, to see if there was any way he could predict trends and make consistent money by gambling on our national pastime.  Peta’s not the first to do so and certainly won’t be the last but would his model succeed where others have failed?

“Bringing together my love of trading and markets, models and sports betting, I decided to use the findings of baseball’s ‘sabremetric’ community to build a model that would beat the Las Vegas baseball line.  I’m talking about doing research, believing that work creates an edge over others, and then investing in that edge.  When trades with a positive expected value present themselves on the trading floor, you jump in with both feet.  Betting on baseball futures was no different.”

You just started paying attention, didn’t you?  Trust me, when I first heard about the book, I was skeptical, yet eager to find whether Peta’s “investments” paid off or whether he was just one of those slick suited, scam artists trying to guarantee us a winner.

He’s not.  His model worked and he goes into a fair amount of detail why, so buckle up and get your calculators ready.

One not need be familiar with the work of Bill James or Billy Beane to enjoy Trading Bases.  Peta introduces the reader to both.  In fact, at times the book is so numbers-intensive, Peta attempts to quantify “luck.”  Go figure. 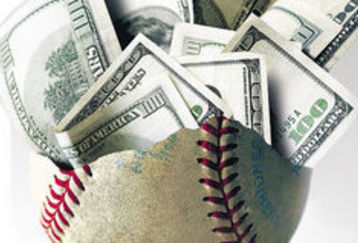 Not only does Peta use his own brand of sabremetrics to determine season over/unders (against Las Vegas’), he uses his strategy to make money on single-game match-ups.  He finds value where he and Vegas differ, then bets accordingly.  He addresses how much to wager and why betting on baseball is more prudent than gambling on other sports.

The book is not only about baseball and gambling.  It’s about his experience on the floor as well.  At some points, Bases got a little too stocks-and-bondsy for me considering terms like hedge funds, basis points and equity-related derivatives don’t exist in my vocabulary but Peta effectively parallels the financial crisis and risk management to gambling, something too few us do after one too many cocktails at the blackjack table.

Using the 2011 season as his test case, Trading Bases details Peta’s renewed passion for baseball, the stock market and the inherent ups and downs of them both.  After experiencing positive returns in April and May, Peta hit a downturn the next two months, which led to panic from some of his backers.  He started to rethink his model, taking a closer look at what was going on.  He discovered that the “cluster luck” of a hot Minnesota Twins team, a team he had projected to do poorly, had messed with his model in the short-term.  After taking a closer look at their success, he banked things would work itself out over time.

So did they, you ask?  Well, obviously the model worked otherwise there would be no reason to write the book.  After one full season, Peta had bet on just over 2000 games, earning himself a 33% return on his investment, despite the ebbs and flows of a few teams that broke trends.  Not a bad year at the office.  He made another 12% return over the 2012 season.

When it’s all said and done, Peta does what most any educated gambler does when it comes to laying big money on games.  He finds inherent errors in a Vegas line then attacks.  He just lives to tell about it and does so with a lot more spreadsheets.

If you’ve never considered betting on baseball, Peta makes a convincing argument on its behalf as long as you do so responsibly.  Just be prepared to put some work in.