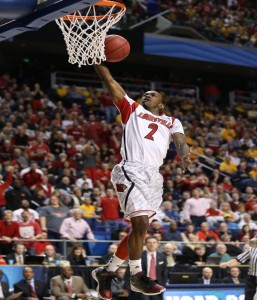 The NCAA Tournament’s initial field of 68 is down to the last four, and in just four days, a new college basketball champion will be crowned in Atlanta. Last season, Kentucky strolled to the title, and though the Wildcats didn’t even make the tournament field this season, it’s a strong possibility that the hardware heads to the Bluegrass State for the second straight season. Overall top seed Louisville have looked like the team to beat all tournament, but Michigan, Syracuse, and this year’s Cinderella team, Wichita State, aren’t going to Atlanta just to see the sights.

Millions will be watching this weekend with great interest and anticipation, especially those who bet on March Madness. Futures bets are pretty popular this time of year, and while the best time to get in on the futures action in terms of odds is before the tournament, having fewer choices can make it a lot easier to decide who to cast your lots with. But to be frank, there’s really only one choice to make.

Heading into the tournament, Louisville and Indiana were the leading favorites for the title at 5/1, but while Indiana couldn’t live up to their billing, needing a late run to survive against Temple in the round of 32 only to fall to Syracuse by 11 in the Sweet 16, Louisville have been strong since the start.

Offensively, Russ Smith is their go-to guy, and while he can be erratic sometimes, he’s been on fire in the NCAA Tournament, hitting 54% from the field, 80% from the free throw line and averaging 26 points per game. It always helps to have a stud like that, but even if he’s misfiring, the Cardinals have several others who can get hot at any time, with seven players total averaging more than five points per game. When you’re rolling with that kind of quality depth, you’re going to be hard to stop.

As good as they can be offensively, they can also be stifling defensively, as shown in game-changing stretches in each of the last three wins. Colorado State hung with Louisville for a good part of the first half in their showdown in the round of 32, but it didn’t last. After taking a 16-14 lead eight minutes in, the Rams committed turnovers on four consecutive possessions and relinquished a lead that they would never see again. In the Sweet 16, Oregon trimmed an 18-point deficit to six with 5:13 left, then proceeded to miss their next seven shots. By the time they scored again, with 1:26 left, their hopes of an upset were dead and buried. In the Elite Eight, Duke met the same brick wall. After the Blue Devils tied the game at 42 with 16:20 left, they missed ten shots in a row, and Louisville went on a 20-4 run that put a Final Four berth well beyond Duke’s reach.

Michigan has arguably the best player in the country in point guard Trey Burke, Syracuse has allowed only 183 points in four tournament games, and Wichita State has a ton of confidence and a ton of shooters, but Louisville is the best team in the land, and they’ll have their crowning–and shining–moment on Monday night.

16 Replies to “Is a Crown in the Cards for Louisville?”