Let us all turn to the third hole at Heritage Isle to demonstrate why.  After shooting a cool par on the first hole, then disgracefully double-bogeying the second, I stepped to the third tee box in an effort to erase the mistakes I had made on the previous hole. 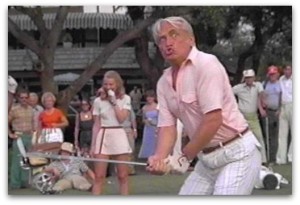 I quickly shanked my drive far right out of bounds, into somebody’s backyard, that dimply little golf ball never to be seen again, by me at least.  I shrugged it off, still somewhat miffed.

I took my penalty stroke, dropped a new ball, pulled out my trusty 6-iron and hoped to finish the hole as painlessly as possible.

That didn’t happen either.

My club face left open, combined with a perfectly flawed swing, sent another brand new golf ball wide right again, nowhere near the flagstick and deep into the woods.

I had had enough.

I threw my club like an Olympian throws a shot put, just with far worse temperament.  My playing partner later joked that the club traveled farther than the ball.  He was wise to wait two holes before saying that.

An odd thing happened, however, after the embarrassing and certainly juvenile, club-throwing incident.  I started playing better.  Not only had I started that round rather miserably (minus the initial par) but my last two rounds had been hack-a-licious as well.  The club-throwing, however, had suddenly exorcised forty plus holes of shitty golf.  I went on to play well the rest of that round.  The club toss, combined with a cold Jack and Coke and a mild cigar from the pro shop, had settled my nerves. 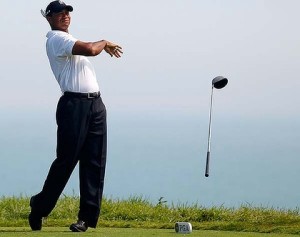 On the professional tour, of course, such behavior is frowned upon but even the best golfers in the world aren’t immune to showing their emotions, whether it is Tiger cursing up a storm or kicking a club at last year’s Masters or Brandt Snedeker wanting to snap his club in two after an errant approach cost him contention this year.

We’ve all been there.  We just don’t resort to throwing our clubs.

I have a friend, a fellow hacker, who once tossed his putter into a tree after recording an eight, ironically on that very same hole at Heritage Isle.  Good times.  He’s since quit the game and is now taking anger management classes.  He seems more even keel now, more in tune with his emotions.

I wonder if heading back out to the golf course would fix all that.

24 Replies to “The throwing of the golf club: An exercise in tamed aggression”