As usual, everyone is asking the wrong questions.

A mere few hours after Dwight Howard gave his “Woe is me” press conference, prompting everyone with a microphone, keyboard, broadcast and opinion to ask whether he would re-sign in Los Angeles next season, I preferred to ask a far, more relevant question.

If you were the Los Angeles Lakers, would you re-sign Dwight Howard? 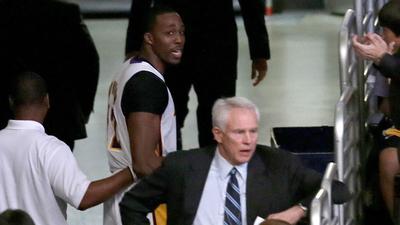 I mean, why would you?  Let’s put aside the fact that when teammates Steve Nash, Kobe Bryant and others went down to injury, Dwight failed to manage a single post-season victory, having been handed back-to-back twenty point losses on his home floor.  Let’s forget the fact that he was ejected in the final game of the season for throwing an elbow and later cursing at a ref.  Let’s also put aside that Dwight then mouthed off to his boss, General Manager Mitch Kupchak, as he exited the tunnel after said ejection.  So much for remorse.

Now that the embers of their season are almost done smoldering, both Dwight and the Lakers have important, off-season decisions to make, whether they will prolong a romance that shouldn’t have happened in the first place or perpetuate a seemingly, unhealthy relationship for years to come.

Here’s the problem as I see it.

Last summer, Dwight followed in the footsteps of other legendary centers, Wilt Chamberlain, Kareem Abdul-Jabbar and Shaquille O’Neal, by leaving the team he once played for and heading west young man to don the purple and gold.  The only problem is that Dwight pales in comparison to those great centers, in both drive and in talent. 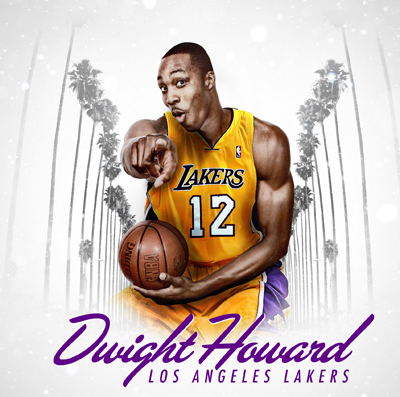 I routinely have this online Dwight debate with another web-dweller who seems to think that Dwight is not only the most dominant player in the game but the greatest thing since sliced bread.

The numbers show otherwise.  Please allow me to retort.

I’ve explained to him that Dwight’s lack of career field goal attempts per game, over which we have a large enough sample size are a product of him a) not having quality post moves, b) not having confidence in said moves (after all, why would he), c) him not demanding the basketball in the paint and even perhaps d) his teammates not having enough confidence in him to get him the ball there consistently.  My opponent in this debate rebuts that Dwight’s lack of field goal attempts are a product of the systems he’s played in, first being coached by Stan Van Gundy and eventually Mike D’Antoni in Los Angeles.

In this case, the numbers do not lie.

This season, Dwight Howard averaged 10.7 field goal attempts per game.  That ranks 81st in the league.

Do you know who averaged more shot attempts per game than him?  Gordon Hayward, Corey Brewer, Marcus Thornton, Jeremy Lin, Ersan Ilyasoa, J.J. Reddick, Brandon Knight, Wesley Matthews, Mike Conley and well, you get the point.  I could name the other 70 players that took more shots per game than Dwight but none of them are getting paid what Dwight is, none of them are as highly touted and none of them should be taking nearly as many shots.  Or at least he shouldn’t be taking so few. 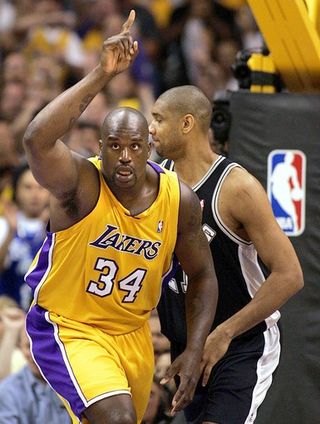 So what does this tell us?   It tells me that Dwight is not a dominant center, or that he could be but he isn’t.  And that’s on him, not any system.  Al Jefferson, Brook Lopez, Al Horford, Tim Duncan, DeMarcus Cousins, Greg Monroe, Kevin Garnett, Chris Bosh, Nikola Pekovic, Nikola Vucevic, Roy Hibbert and Marc Gasol ALL technically played the center position this season and ALL of them averaged more shot attempts than Dwight Howard.  That’s right.  Not only did a guy named Greg Monroe take more shots per game than Dwight but TWO GUYS NAMED NIKOLA did as well.

Go ahead and blame Kobe.  Blame D’Antoni.  Blame the system.  You’d be wrong.

Ask not for whom the blame tolls, Dwight.  It tolls for thee.

Until the man who calls himself Superman learns to be an effective post presence and the consistent scorer that he should be, he will not get the shot attempts he deserves, nor should he.

For that reason, Los Angeles re-signing him to a long-term deal should not be a foregone conclusion.  And whichever team that does might want to look at a stat sheet.