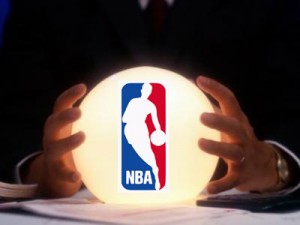 All good things must come to an end.  That includes my second annual NBA Predict the Future contest.  Once again, this year’s results came down to the wire with us, in the end, declaring a brand new champion.

Congratulations to you, sir.  Now here’s a quick look at some of the questions we asked back in November:

Questions 3&4: Will the Nets make the playoffs/host a home playoff series?

Most of us (7/10) figured the Nets would make the playoffs but not host a home playoff series.  They ended up a 4-seed, winning 49 games but losing to the Chicago Bulls in the first round.  It looks like most of us were right by not putting too much faith in the Nets.

Question 5: Will Mike Brown finish the season as head coach of the Los Angeles Lakers?

This may have been my favorite question of the contest.  Talk about giving away free points.  Not only was Mike Brown fired while the ink was still drying on my original post (he was let go five games into the season), I should have asked whether he’d have another coaching gig before the playoffs ended.  He does, as he was recently hired back by the Cleveland Cavaliers. 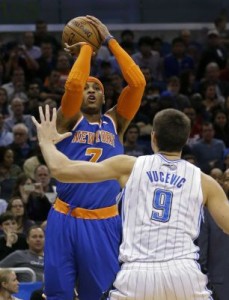 Question 6: Who will lead the league in scoring?

It would only make sense (ballhog) that the guy who led the league in scoring (ballhog) would be the one (chucker) who took the most shots, right?  Wrong!  Carmelo Anthony ranked fourth, not first, in total field goals attempted this season, but he still landed his first ever scoring title, breaking Kevin Durant’s string of three consecutive.  For the record, none of us picked Carmelo to win this category.

Here’s the question I’m most proud of.  Someone get Las Vegas on the phone, my bags are packed.  I swear I didn’t check Las Vegas’ over/under win total for Miami before writing this post.   I came up with the 66 ½ all on my own.  The Heat finished with 66 wins.  Too bad I had the over.

Question 8: Who will lead the league in assists?

The Boston Celtics suffered a huge blow when they lost their point guard Rajon Rondo to injury.  Having played half the season, however, he still qualified to lead the league in assists per game.  I would have considered giving eight points to the person who correctly named the player who led the league in total assists but considering none of us mentioned New Orleans Hornets’ point guard Greivis Vasquez (who?), I figured I’d award eight points to those who listed Rondo and move on. 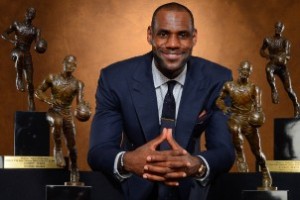 Question 9: Who will win league MVP?

Question 10: Who will lead the Lakers in field goal attempts?

In retrospect, this was a pretty silly question.  All of us said Kobe Bryant.  All of us were right.  Remind me not to ask this question again next year.  A more appropriate question might be who will be on their 2013 opening day roster.

Question 11: Who will be the first player to score 50 points in a game?

Kevin Durant can pretty much score 50 points whenever he likes.  He was the first to do so this season, dropping 52 on Dallas in mid-January.  Side note: Durant shot 21-for-21 from the free throw line that night.

Question 12: Which Los Angeles team will have the better record: Lakers or Clippers?

Remember when some of us actually debated the answer to this question?  FYI, six of us, including yours truly chose the Lakers.  Not that it matters.  Neither team made it out of the first round of the playoffs. 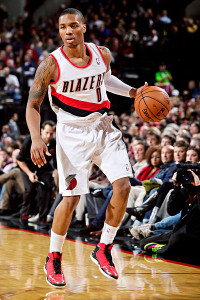 Question 13: Who will win Rookie of the Year?

Damian Lillard won this year’s ROY Award in a landslide on his way to becoming the most famous Weber State graduate to play in the NBA.

Question 14: Which team will end up with the worst record in the league?

I so wanted to pick the Orlando Magic here but I thought I might be accused of being a bitter fan.  Nobody, including me, picked the Magic to finish with the worst overall record.  They did.  Can we stop talking about it now?

Question 15: Who will lead the league in double-doubles?

Yet another swing and miss for my readers.  None of us listed the eventual winner, David Lee.

Question 16: Who will lead the league in triple-doubles?

Despite having played only half the season, Rajon Rondo still led the league in triple-doubles with five.  FYI, LeBron James, your nearly unanimous, league MVP had four.

Question 17: Who will finish with the third best record in the Eastern Conference?

I can’t exactly remember what I was thinking when I asked this question.  I mean, I knew the Heat would finish with the best record and probably assumed either the Celtics or Knicks would end up the two-seed.  I think I was just trying to see who we all thought would be third best.  That team would be the Pacers.  Only two of us picked that correctly. 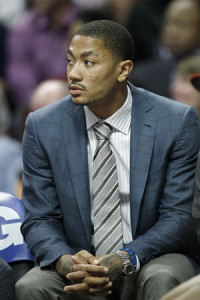 Question 18: Who will finish with the second best record in the Western Conference?

Same thing here.  I think I was trying to see how many people would say Lakers.  Two of us actually did.  They shall remain nameless to not cause further embarrassment.  The correct answer was the San Antonio Spurs.

Question 19: When will Derrick Rose return?

He still hasn’t.  None of us got this right.

Question 20: Who will be the first player fined for flopping?

Half of us chose either European or Latin American players.  I call racial profiling.  The first player in NBA history to ever receive a monetary fine for flopping was Reggie Evans.  Remember that for it’s bound to make a great trivia question someday. 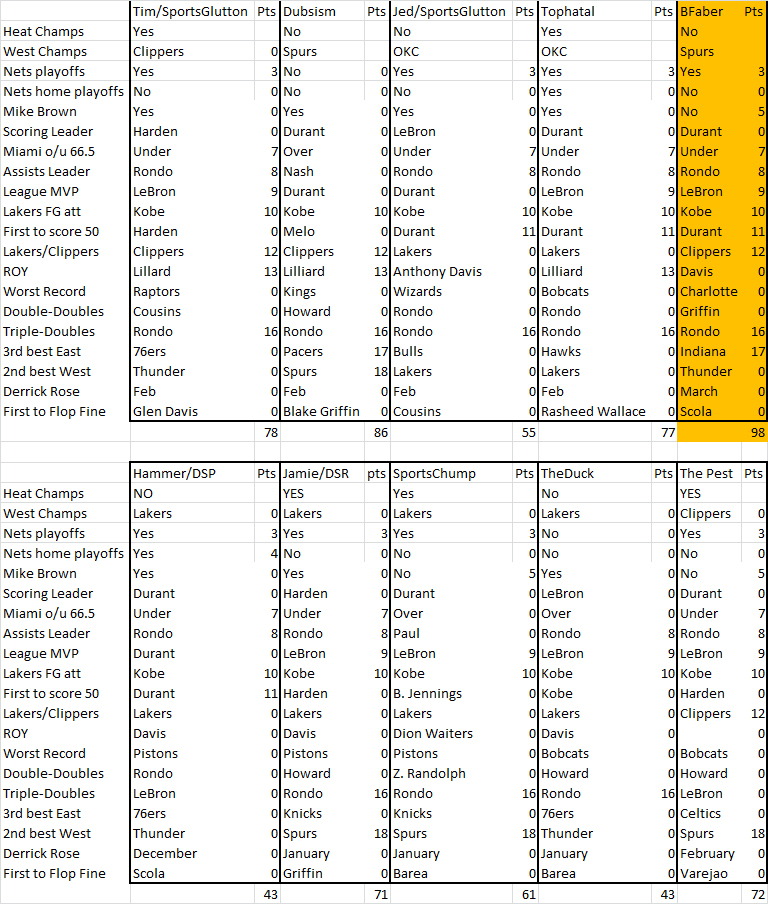