We haven’t had a good, poke some fun, caption contest in a while so since we’re in the midst of the NBA playoffs where we regularly see fake-spectacled, fashion statements gone awry, I figured what better way to celebrate the derailment that has become the NBA’s dress code.

On Wednesday night, after Miami evened things up against the Chicago Bulls, Dwyane Wade wore this jacket (see below) to the post-game press conference.

Do not attempt to adjust the color on your monitor.

First of all, Wade plays in South Florida where it’s always eighty degrees and sunny, but if it were cold enough for a jacket, why in the world would you wear one like this?

My Grandma Ana used to have plastic covered couches in her living room.  I’m sure she wasn’t the only grandmother who did.  When I saw Wade’s post-game attire, those couches were all I could think of.

Anyway, to the victor go the spoils.  The person who comes up with the most clever caption in the comments section below will win some Paper Mache flowers (just in time for Mother’s Day), a brand new sofa (with the purchase of a brand new sofa) and the right to dust off that old Members Only jacket and wear it proudly around town without being ridiculed. 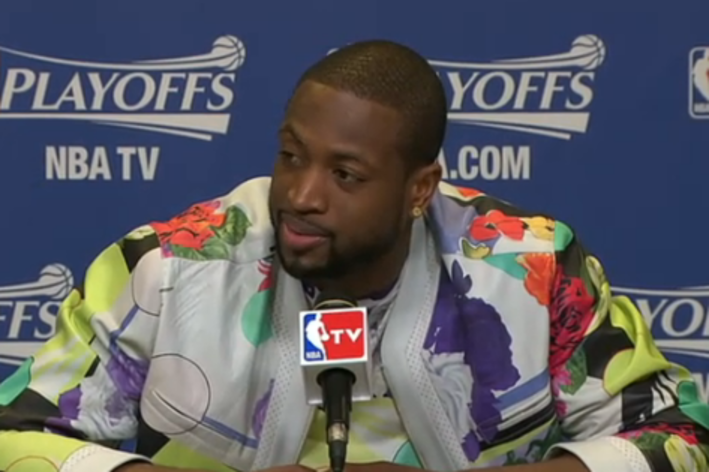