“It’s not really surprising that he’s complaining about something.”

I’ve never had a rival.  I guess I’m too friendly of a guy.

Don’t get me wrong.  There are people that I like and dislike, people whom I trust and those I choose not to associate with, but I can’t necessarily say I have a rival, someone to push me, someone I compete against on a regular basis.

Maybe that’s because I don’t play professional sports for a living, but I still work, as most of us do, in a competitive environment.  You can’t sit there, behind your office desk, and tell me that you don’t look over your shoulder to see who’s gunning to either take your position or do their job better than you. 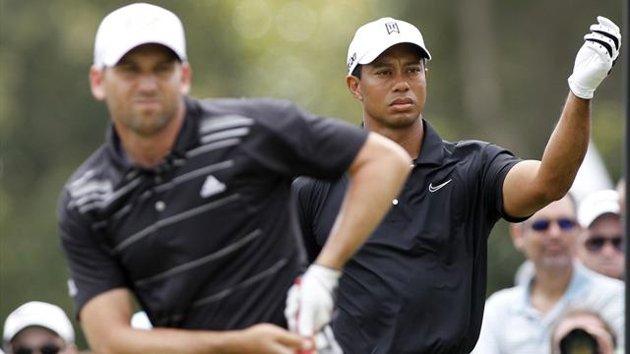 If you’re not, you should be.  And if you’re a business owner and not doing the same, then you’ve lost your competitive edge.  Don’t be surprised when your bottom line or even your livelihood suffers the consequences.

The bitterness started on a beautiful Saturday afternoon at TPC Sawgrass but the hatred between these two golfers has been brewing for years.  Their most recent squabble just reminded us of what a healthy sports rivalry is all about and why we, as sports fans, enjoy them so much.

To make a long but entertaining story short, Tiger, who was playing in the same group as Sergio on Saturday, allegedly pulled a golf club from his bag.  The crowd reacted.  The only problem was that he did so right in the middle of Sergio Garcia’s backswing.  Garcia sliced his approach shot right into the woods, going on to bogey the hole.  Needless to say he wasn’t too happy, openly accusing Woods of foul play.

The following afternoon, with both golfers tied for the lead and only two holes to play, Garcia put consecutive tee shots into the water on TPC’s famous 17th island hole, finishing with a quadruple bogey, dropping out of the lead and essentially handing Tiger the tourney.

The chirping between the two continued after the tournament was over.  The media saw to it.  It made for good golf, with Tiger once again the victor and the shorter, slighter Spaniard referring to himself as “the victim.” 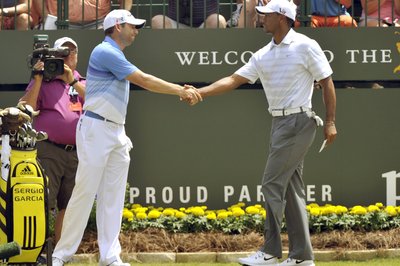 It doesn’t matter whom you side with in this case, Tiger or Sergio.  We watched, discussed and debated but more importantly, we were reminded what rivalries are all about.

Show me a Florida-Florida State game where the athletes genuinely like each other and I’ll show you a boring football contest.

We don’t want our rivals to be chummy, we want them heated.  We want to see Nazr Mohammed shove LeBron James to the floor.  We want to see a pitcher brush back a hitter, followed by the ensuing stare down or rushing of the mound.  We want to hear Chale Sonnen talk trash before a big fight.  And we want Tiger to not only dominate on the golf course but back it up with a clever sound bite.

These are great sports rivalries as we know them and sometimes, just sometimes, the handshakes, while sportsmanlike, are a forced option.

We can all get along after the buzzer sounds but there’s nothing wrong with a little, healthy competitiveness while the clock is still ticking.  If nothing else, it ensures us we’re still the best we can be.

38 Replies to “Tiger versus Sergio: A great sports rivalry revisited”