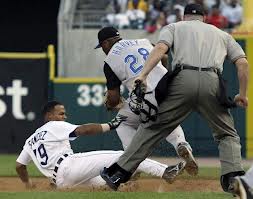 A runner slides into second base.  A call is made.  The runner is punched out, but in all actuality, he is safe.  The inning is over, the rally ends.  The manager sprints out to argue, incensed and adamant that the umpire blew the call.  He did… but what’s the point, really?

Before we continue, please do not mistake this as another plea for instant replay.  Sensible baseball fans understand replay will come in due time, or in other words, once Bud Selig retires.

This is about talking to a wall, like arguing against your girlfriend in a fight you just can’t win.

Never in the history of mankind, or at least Major League Baseball, has an argued call been overturned, at least not to my knowledge.  When’s the last time you remember seeing a manager argue with an umpire and the umpire saying “Ya’ know what, Dusty?  You were right.  Let me just change my mind and reverse this call.”  Never, that’s when.  They’d have better luck finding a Chick-Fil-A open on Sunday.

Sure, as fans, we enjoy the days when Sparky Anderson, Earl Weaver or Lou Piniella would turn beet red, going nose to nose with whichever umpire they felt had just robbed their team of an opportunity but even those guys, the best arguers of all time, couldn’t get an ump to change his mind.

It hasn’t happened since then either.

People say the definition of insanity is doing the same thing over and over again and expecting a different result, yet managers still fruitlessly charge the field, gunning after umpires, with literally a zero percent probability rate of getting them to change their minds. 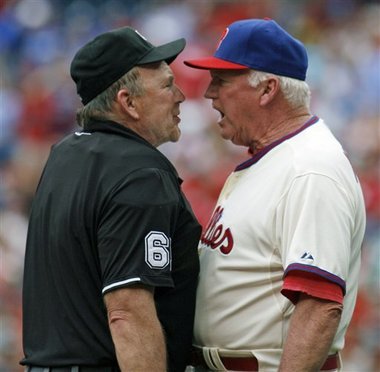 So why do they still do it?  When a base runner is called out, why would a manager bother arguing a call when there’s no chance of it being overturned?  To speak his mind?  To let his team know he has their back?  For a brisk workout?  Or just to blow off steam?

When a customer walks into my bar and complains about a drink I made poorly (which rarely happens), I quickly diffuse the situation by making them another drink 100% of the time.  Managers never get their replacement drink.

Don’t get me wrong.  Managers going tete a tete with umpires is one of the most colorful parts of our national pastime but logically, it’s pointless.  As entertaining as it is to see a manager blow his top, just once I’d like to see a manager get jobbed on a call and just wave his hands dismissively from the dugout, understanding that running out to dispute said call is an exercise in futility.

At least that would make more sense.

34 Replies to “For the sake of argument”