About a month and a half ago, it looked likely that the Miami Heat and Oklahoma City Thunder would lock horns in the NBA Finals for the second season in a row. However, Russell Westbrook’s knee had other ideas, and without their erratic but highly talented guard, the Thunder were booted out by the Memphis Grizzlies in the Western Conference semis. 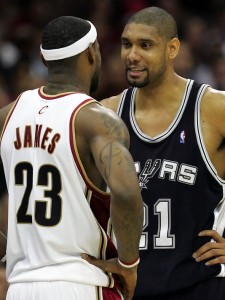 Still, fans should be treated to an excellent series, as the defending champion Heat and the San Antonio Spurs, who are in the Finals for the first time since 2007, are the last two teams standing. Unsurprisingly, NBA playoff betting odds have the Heat as firm favorites to take the title and become the first Eastern Conference team to repeat since the Bulls’ second back-to-back-to-back run in the late ‘90s.

Will they back up that label and see off the Spurs? After dispatching the Bucks and Bulls with relative ease in the first two rounds, they enter the Finals fresh off of a seven-game slugfest against the Indiana Pacers. The expected result was ultimately achieved, but the series exposed a few chinks in the armor. The Pacers gave as good as they got and then some until getting dominated in the final three quarters of Game 7, and had they made a defensive stop at the end of Game 1, they could have pulled off a stunner.

Meanwhile, San Antonio overcame hungry teams in their last two series, defeating Golden State in six in the Western Conference semis before bringing the Grizzlies back down to earth with a four-game conference finals sweep. The Heat, with the best player in the game in LeBron James, are a different animal, but the Spurs won’t be short on preparedness, and not just because they’ll have had a week and a half to get ready for the series.

Getting pushed to the limit by the Pacers could be a much-needed wakeup call for the Heat, as they’ll need to be at their best to best the Spurs. Some may see the Spurs’ freshness as an advantage, but Miami’s fairly quick turnaround from a tense, emotionally-charged series means little time to have the letdown that can come from a long break.

Last year’s World Series is a prime example. The Giants had less than 48 hours between a Game 7 NLCS win against St. Louis that capped off a comeback from a 3-1 deficit and Game 1, whereas the Tigers had a six-day break between the end of their four-game ALCS sweep of the Yankees and their World Series opener in San Francisco. Not only were the Tigers fresher, but they were throwing ace Justin Verlander in Game 1. The end result? An early exit for Verlander and a 8-3 win for the Giants, who then posted back-to-back shutouts and went on to finish off the sweep.

Now, the Spurs likely won’t fall apart as easily as the Tigers did, but now that the Heat have seen that coasting won’t get the job done, expect their best, and it’s hard to see their best not being good enough to fight off any valiant effort the Spurs give.