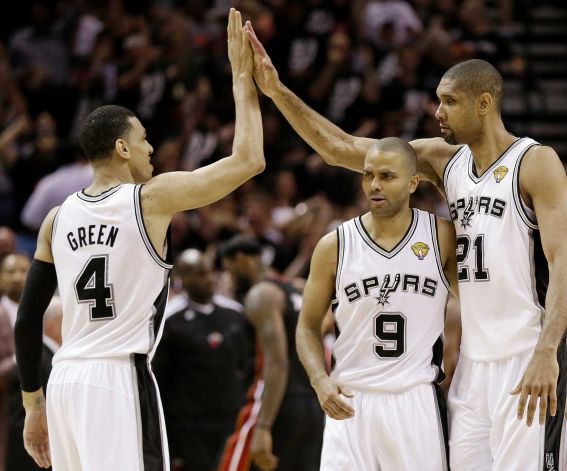 San Antonio are within touching distance of glory after beating Miami 114-104 on Sunday night to move 3-2 up in this classic NBA Finals series.

The Spurs came out 2-1 from their three home ties in this series and now must head back to Florida for two gruelling games against a Heat side who have led from the front all season. In fact, the Heat barely even know what it’s like to be behind but have played catch-up all series and now must match the Spurs at home.

Tony Parker once again proved his value to San Antonio with a 26-point haul at the AT&T Center on Sunday, the second time he has emerged top points scorer this series. Parker and Tim Duncan have effectively earned their side two wins at home and now they must prove themselves on the road.

Miami’s Big Three will come out pumped and San Antonio must replicate the incredible defensive performance that saw them restrict the Heat to just 88 points in Game 1.

Although Dwyane Wade, LeBron James, and Chris Bosh effectively earned Miami their points in the series opener, the Spurs shut down much of the play, surprising the NBA betting odds to nail a win right at the end.

It was a cutthroat defensive performance on the road and head coach, Gregg Popovich, will want to see the same commitment from his men. Unfortunately, that may be easier said than done, for Miami is a wounded lion priming itself to attack.

Wade was immense on Sunday night but cannot do it all on his own, as James played a nightmare second half, shooting just two for 11. Bosh also had a terrible second half – managing six and a sole rebound – as the Heat’s offensive influence died.

Yet fans who bet on NBA should not expect the same outcome on Tuesday. The Big Three have a point to prove and with a home crowd behind them, the Heat should defend this championship point and force a Game 7 showdown unlike any we’ve seen for a long time.