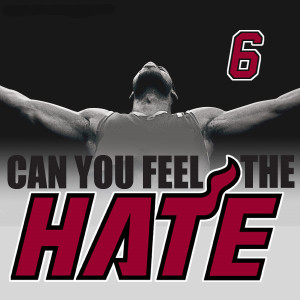 And so, it is done.  Another basketball season has come to a close with the Miami Heat raising another trophy and LeBron James fitting himself for another ring.  These were an NBA Finals for the ages with unfortunately, one team having to be the loser… that being the San Antonio Spurs.

Aside from being thoroughly entertained by these playoffs, I actually learned something this year.

I was under the impression that most basketball fans were rooting for the Miami Heat.  Maybe it’s because I live in Florida (where there are still plenty of Heat haters afloat) but I just assumed that much of the resentment surrounding LeBron’s “Decision,” his subsequent Clevelabandonment and his overwhelming desire to play alongside his BFF had subsided.

The majority of fans around the nation were rooting for San Antonio.  While both teams are likeable in their own right, with all-time talents and several sure-fire Hall of Famers, most still wanted to see the Heat go down in flames.

As Clayton Bigsby once told us, if you have hate in your heart, let it out.  In the comments section below, if you hate the Miami Heat, please tell me why, in 250 words or less.  If you like the Heat but understand why others are repulsed by them, please do the same.

The commenter with the most prolific and sound entry will receive not only a hate-free, SportsChump t-shirt to call their own but a brand new copy of Craig Carton’s “Loudmouth.”

As I am my own editor, please note that I will account negatively for run-ons, incomplete sentences and misspellings and look favorably on originality.  Profanity is permitted.  After all, we’re all grown-ups here.  However, I can assure you that simply saying “I fucking hate LeBron James” will not win you a fucking SportsChump t-shirt.

Best of luck, sports fans.  Break out your thesauruses and let the hate commence.