Former Boston Celtics coach Doc Rivers expects veteran Kevin Garnett to play on next season, although it may not be for the team he has represented since 2007. 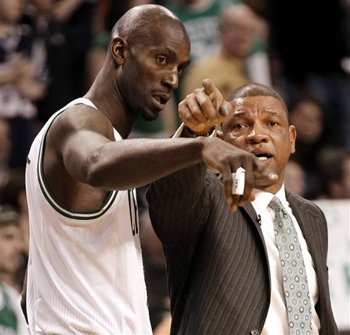 Rivers, who was this week appointed as the new Los Angeles Clippers coach, is in a good position to predict Garnett’s next move having spent the past six seasons coaching the 37-year-old. He believes Boston’s star man will return for his 19th season in the NBA, meaning he would continue to feature prominently in sports betting.

“I think he’ll play this year for sure. That’s just my gut,” said Rivers.

Garnett’s contract still has two years to run but he has reportedly been considering his future in recent times. His exit would leave a huge hole at the Celtics and would be a further blow to the team after the departure of Rivers, who spent nine years in Boston before leaving for LA.

The Celtics are rebuilding so Garnett may be open to a trade to a team which has a better chance of being in with a shout of an NBA title. It was suggested he could join Rivers at the Clippers, a link the 51-year-old coach described as “intriguing”.

However, the NBA has told the two teams they cannot swap players for the 2013-2014 season because it could be seen as a “side deal” in Rivers’ move. It is against league rules for players to be included in deals involving a coach leaving his contract early.

Rivers does not know whether Garnett will seek a fresh challenge; he just wants his former lynchpin to be happy.

Punters with a passion for the NBA can get the latest odds with bet365 for next season.